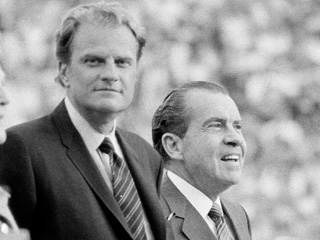 New tapes of Richard Nixon once again have the former President and the evangelist talking about Jews in disturbing ways.
Cathy Grossman of USA Today summarizes:

“ixon raises the news that Israel had mistakenly shot down a Libyan civilian airliner, killing all on board. Nixon says, ‘What I really think is, deep down in this country, there is a lot of anti-Semitism, and all this is going to do is stir it up.’
Graham agrees that it will push anti-Semitism ‘right to the top.’ Then he turns the conversation to a report he read somewhere that Israel supposedly wants to ‘expel all the Christians.’ Graham mentions Jewish opposition to a Christian evangelical unified campaign, saying Jews are ‘going right after the church.’

If it weren’t for the “expel all the Christians line” (and their previous comments!) you could say Nixon and Graham were genuinely concerned about an unfortunate rise in anti-semitism. But the rest of the passage shows Graham encouraging Nixon’s anti-semitic inclinations.
By the way, Israel has never had a plan to “expel all the Christians.”
Earlier tapes had shown Graham agreeing with Nixon’s anti-semitic ramblings and adding a few hostile comments of his own. Grossman again:

An earlier release of tapes in 2002 shocked fans of Graham, who is heard agreeing with Nixon as the president rails against liberal Jews’ political activism and media clout. Graham tells Nixon how Jews befriend him but adds, “They don’t know how I really feel about what they’re doing to this country.”
On Wednesday, as he did in 2002, Graham’s longtime spokesman A. Larry Ross said Graham has never been an anti-Semite and that the remarks should be understood in context, as part of a conversation with the president.