Is Sotomayor an Abortion Centrist? (Updated)

After the announcement of Sonia Sotomayor’s selection, abortion groups lined up predictably, pro-life groups expressing outrage and pro-choice offering praise. Everyone seems to be assuming she’s ardently pro-choice, if for no other reason than that Obama’s appointed her.
But there’s stunningly little information about her abortion views – and what we do know hardly paints her as a pro-choice activist.
She’s ruled on only three cases indirectly related to abortion and in each case she took the position preferred by the pro-life forces, albeit for reasons unrelated to the merits of abortion.

In Center for Reproductive Law and Policy v. Bush, she ruled against the pro-choice group wanting to overturn the Bush administration’s ban on family planning funds going to abortion. Constitutionally, she wrote, the government “is free to favor the anti-abortion position over the pro-choice position, and can do so with public funds.”
In Amnesty America v. Town of West Hartford, she ruled in favor of the rights of anti-abortion protesters.
In Lin v Gonzales,she ruled in favor of a Chinese woman who sought asylum in part because of the forced sterilization and abortion policies of the Chinese government.
Her reasons had nothing to do with abortion – instead relating to matters of Constitutional law and criminal procedure – but at a minimum, it showed that whatever her abortion views, it didn’t produce some powerful inclination against the pro-life position.
In addition, though we certainly can’t assume much about Sotomayor’s legal opinions based on her ethnicity, it is the case that Hispanics are the most pro-life members of the Democratic coalition. In Beliefnet’s “12 Tribes” study conducted in the summer of 2008 by Professor John Green, 58.9% wanted strong restrictions on abortion, while 41.1% took the pro-choice position. She may well be in the 41.1% but she appears to have grown up in a broad culture in which the pro-life position was prevalent and well-respected.
And for those trying to divine her abortion views, there’s one more tea leaf to read: she was on the board of a group formerly called the Maternity Center Association, now called Childbirth Connect. They list “20 Rights of Childbearing Women.” None of them relate to the “right to choose.” In fact, I find no mention of abortion on their website.
Now, all of this might not mean anything. She may prove to be a strong advocate of Roe v. Wade. But it’s telling that the abortion interest groups took sides without knowing anything about her abortion views. Nancy Keenan, President of NARAL Pro-choice America, praised her judicial accomplishments but added, “We look forward to learning more about Judge Sotomayor’s views on the right to privacy and the landmark Roe v. Wade decision as the Senate’s hearing process moves forward.”
Americans United for Life, an anti-abortion group, focused more generally on her liberal philosophy. “She believes the role of the Court is to set policy which is exactly the philosophy that led to the Supreme Court turning into the National Abortion Control Board,” said the group’s president, Charmaine Yoest. It certainly would be ironic if the pro-life groups succeeded in blocking Sotomayor only to get a replacement nominee with an actual record of pro-choice opinions. 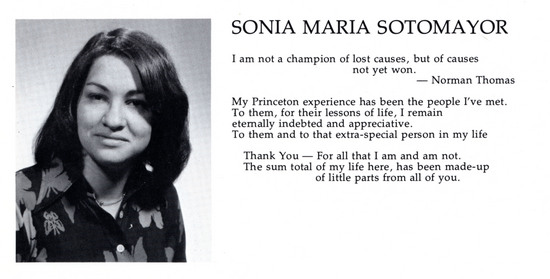