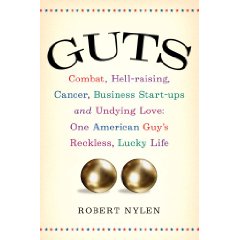 Here’s an excerpt from Bob Nylen’s riveting new book, in part about his experiences in Vietnam. Bob, the co-founder of Beliefnet, died in December 2008:

“For several days, a private in Robert McNamara’s breathe-and-you’re in Army had played the same grotesque joke. He pulled the pin of a hand grenade, making a distinctive ping, and rolled the grenade toward his mates. The first time he pulled this depraved stunt, his mates scattered, terrified. Nothing happened. He laughed. Before tossing his little present, he’d pulled out the detonator cylinder, rendering the grenade harmless. When his buddies regrouped, the dope showed them that the metal ball was hollow, harmless. Ha ha ha! His goggle-eyed mates pummeled him: “never again, Bozo!”
He played the same trick the next day; this time, his mates beat him harder.
The third day he pulled his idiotic stunt, his mates flinched, sighed, muttered, and kept eating. They wouldn’t fall for the lame gag again; but this time, he’d forgotten to pull the rod.
Prone and trembling on the pit’s rim, the men didn’t look hurt. American grenades don’t render flesh as gruesomely as do artillery, claymore mines, or tumbling AK-47 bullets. Each fragmentation grenade expels six hundred tiny wire splinters. If a grenade lands on you, flechettes can rip off your arm. More likely, if it lands close, they’ll kill slowly by driving deep into viscera, causing internal bleeding. A grenade is diabolical because it doesn’t kill outright: it requires uninjured men to help victims, demobilizing whole units. The wounded men moaned. One died en route to Chu Lai, another died in the MASH unit, fratricide, plain and simple. The third and fourth guys didn’t return.

So it went again and again. If they didn’t kill us, we killed one another. Friendly fire, accidents, and stupidity caused a third of U.S. casualties. Collateral damage, we call it now when ordnance falls where it shouldn’t and hits unintended victims. “FF”: shorthand, a sterile euphemism, for slaughter and gore.
“What should we do with this dumb cluck?” Our new CO, a proper captain, thank goodness, posed a rhetorical questions. “I’ll court-martial him,” the CO said, “unless you have a better punishment.”
After ten weeks in country, by defualt, I was the tenured company officer, not its most senior. I had status as a counselor, not a decision maker. The perp was just a kid, and a dope. He sat forlorn, dull eyes glazed, alone with self-centered, incoherent thoughts. His life would never be the same, I hoped, nor should it be.
Don’t court-martial him, I said. You send him to Long Binh Prison, he goes on trial, we send witnesses, lose manpower. The court finds him guilty. He goes to Fort Leavenworth and serves ten years for manslaughter. He’s in Kansas! We aren’t. He has a toilet; we don’t. He can exercise and watch TV, if he behaves. Then he gets a dishonorable discharge. B.F.D. He’s free.
No, keep him here. Make him live with us. Every cherry will hear his pathetic story the day he jumps off the chopper. Give him the worst duty you can think of – walking point, carrying the base plate. Serves him right. Make him burn our sh—ers when we’re lucky enough to have them. Maybe he’ll get shot. Maybe he’ll die. Who cares? That works for me.
My solution appealed to the COO. After all, one military punishment was closed to us: we couldn’t send him to Vietnam.”