Why Didn’t Ashcroft-the-Christian Stop The Torture? 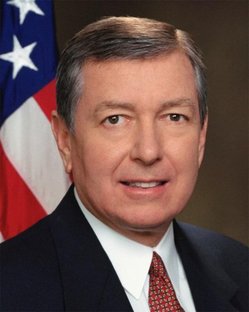 When George W. Bush was running for President, Christians hoped that having a devout man in the White House would lead to more a more moral government..
But Bush wasn’t the most interesting test of the theory. Though his faith was important to him, it never had nearly the depth of another member of the team — John Ashcroft, the Attorney General. Devoutly religious, Ashcroft led daily Bible studies as Attorney General. In deference to the Bible, he banned the word “pride” form his official correspondence. “I don’t particularly care if I do what’s right in the sight of men,” he has said. “The important thing is for me to do right in God’s sight…The verdict of history is inconsequential; the verdict of eternity is what counts.”

But recently released documents show that senior Bush adminsitration officials authorized torture not only in principle but in repeated, specific instances. In the middle of interrogations, captors would turn back to officials in Washington for approval of particular steps. Mark Danner, author of a new book Torture and Truth, explains that CIA briefers regularly updated the National Security Council’s Principals committee which included Dick Cheney, Condelleezza Rice — and Ashcroft. “As the interrogations proceeded, so did the briefings, with George Tenet, the CIA director, bringing to senior officials almost daily reports of the techniques applied.” Many of the key memos justifying torture also went through Ashcroft.
I’m not saying this was an easy position for Ashcroft. As the chief law enforcement official, he felt an urgent personal responsibility to stop terrorist attacks. He likely made a morally utilitarian calculation that the ends in this case justified the means. Many people did.
But what Ashcroft never did, apparently, was ask: What Would Jesus Do?
There’s no record of him challenging the practices on either practical or moral grounds. We have no reports of him airing the Christian case against torture, which has even been embraced by moderate evangelicals and conservatives like Richard Land of the Southern Baptist Convention. (To torture someone made in God’s image is, they argued, counter to the message of the Bible).
Ashcroft did reportedly question whether people at his level should be involved in the blow-by-blow decision making but his qualms seemed to be more about protecting the White House from blame than stopping the behavior. “Why are we talking about this in the White House?” he reportedly said. “History will not judge this kindly.”
In Never Again, his book about his years as Attorney General, Ashcroft doesn’t mention torture or “enhanced interrogation” at all. He doesn’t ackowledge wrestling with the ethical issues, even by way of justifying the decisions. The closest he comes is a phrase defending the right to “ask probing questions” of suspected terrorist detainees.
On one of the greatest moral questions of the administration — and arguably one of the greatest challenges to Christian ethics of the last decade — he has nothing to say.
For sake of argument, let’s say Ashcroft shouldn’t have brought his religious beliefs into his decision-making. Perhaps we want our Attorney General to completely submerge his religion when dealing with policy. Indeed, on other occasions Ashcroft apparently went against his personal beliefs in order to enforce the law — as when he had federal marshals protect doctors who perform abortions.
But if that’s the case, I’m left wondering: what is the value of having a religious person in office? I don’t mean that as a snarky rhetorical question. I’m honestly perplexed: if ever there was a situation when we actually could have benefited from having a self-righteous, moral, Bible-reading, God-fearing Christian in the room to morally challenge utilitarian thinking, the discussions about torture would have been it.
Perhaps John Ashcroft’s flaw was not that he was too Christian on the job but that he was not Christian enough.
read next post

"Yes We Can!" Welcome Back "the Messiah" (The One From Brooklyn)
archives most recent
More from Beliefnet and our partners
previous posts