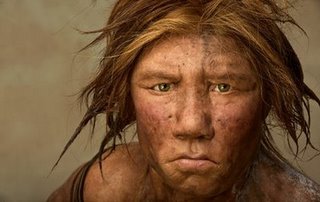 :
Until the recent discovery of Neanderthal DNA, I hadn’t realized that this species actually existed side by side with homo sapiens. (I had naively assumed homo sapiens descended from primitive Neanderthals).

There’s something I always wondered and, while attending the Templeton science and religion conference, I had the opportunity to quiz a real espert, Lord Colin Renfrew, an esteemed Cambridge professor of archeology.
The question is a bit prurient so I waited until after class and then asked: what would happen if a fesity young Neanderthal woman and a strapping young homo sapien male caught each other’s eyes across the field? Would they view inter-species love as being grotesque the way most of us view, say, mating with an ape?
On the contrary, reports Renfo, they would probably have seemed so similar that inter-breeding could have been possible. Indeed, he said, some paleontologists believe they have found fossil records of such cross breeding.
Genetics aside, can you imagine how the parents must have reacted to the news that their impetuous offspring had decided to date a different species? I can hear the homo sapien parent grunting, “no son of mine is going to hang around with that trash. Have you ever seen how tacky their hand axes are?” Or the Neandertha’s mom saying, “those homo sapiens think their better than everyone, with their snooty art collections and bevelled beads.”
But (at least according to my version of the screenplay) the young lovers would persist, creating a new cross-bred family honoring the noble traditions of both.
UPDATE: Cathy Grossman at USA Today focused on a more meaninful part of his lecture, the idea that since our genetic structure hasn’t changed much in 100,000 years, Darwinian principles can’t explain much about human evolution. 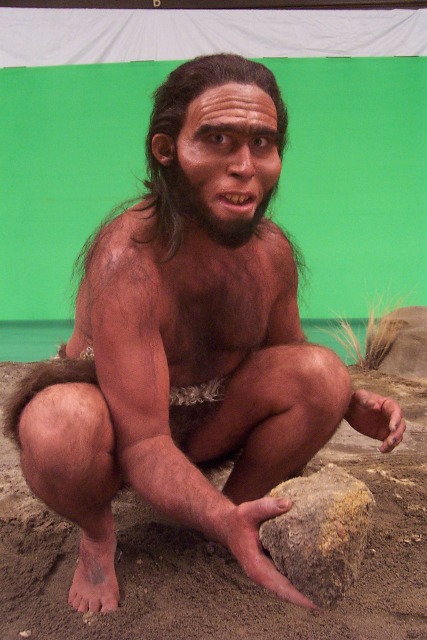 read next post
Was Evolution Accidental -- Or Inevitable?
archives most recent
More from Beliefnet and our partners
previous posts