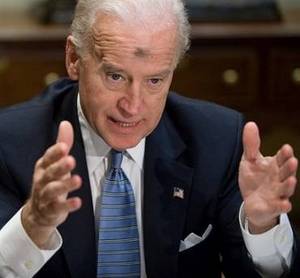 We’ve seen many historic Presidential “firsts” in this administration, what with the first African American President taking leadership.

Yesterday we had another: the site of the Vice President of the United States leading a White House meeting with a smudge of ash on his forehead. The only other Catholic to hold one of the highest offices was John F. Kennedy and, as far as I’ve been able to tell, was never photgraphed at a public event with the marks of Ash Wednesday.
This is worth spending a moment to ponder and celebrate. Opposition to, and persecution of, Catholics was common through much of our history. Indeed, while researching my book Founding Faith, one of the things that surprised me most was the ways that some anti-Catholic sentiment fueld the Revolutionary War.
And yet here we are with the Vice President not only being Catholic (as John Kennedy was) but appearing Catholic. Another milestone for religious freedom and pluralism.
One thing I suspected but could never prove about the politics of all this was that Biden would help pull more Catholics than John Kerry, a Catholic, did. Though theologically they’re both similarly in the doghouse with the Church (over abortion), Biden was a full-blown cultural Catholic, and Kerry wasn’t.
A new study of the religious patterns of the election doesn’t touch on a possible Biden role (which I suspect was minimal in the way vice presidential picks always are), but it does show something stunning: the ticket improved dramatically among traditional Catholics — the ones who go to mass most, pray most, believe in most Catholic doctrine. Obama-Biden improved on Kerry’s performance by a staggering 17 points according to a new survey by Prof. John Green of University of Akron.