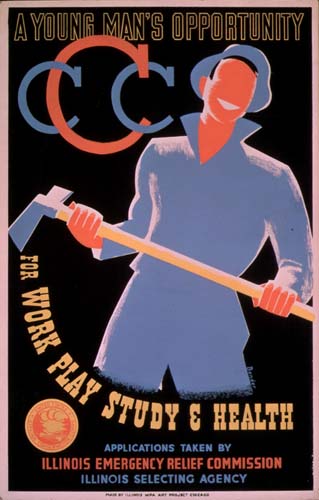 The Obama administration may be about to squander a historic opportunity. By all reports, the economic recovery plan doesn’t include a large-scale national service program.

Franklin Roosevelt viewed the Civilian Conservation Corps as an essential part of the New Deal, and it became one of its most popular programs. It was, Roosevelt said, “killing two birds with one stone. We are clearly enhancing the value of our natural resources and second, we are relieving an appreciable amount of actual distress.”
Too often, modern politicians have viewed national service as a lovely little “worthwhile program,” certainly a swell idea but not something that trumps the critical business of saving the economy.
That’s the wrong way of looking at it.
First, the current economic collapse affects not only the unemployed auto-worker but his 21-year old daughter just out of college and unable to find a job. The youth unemployment rate is now more than 20%. In hard times, applications to full-time community service programs increase, as other post-college options whither. Already, two out of three people who want to serve in AmeriCorps are being turned away from full time domestic service programs.
Second, these service workers can be a critical part of meeting Obama’s recovery goals. National service members can work on permanent and cost effective national improvements such as energy efficiency or improving schools.
A major national service program would also boost the struggling charitable sector, which is facing its own economic catastrophe: in many places, need for services is rising as donations are falling. Full-time national service workers are an in-kind subsidy to the non-profit sector. Most AmeriCorps members do not work for the government, they work for charities like Habitat for Humanity or Red Cross, often helping to manage unpaid, occasional volunteers. Last year, 75,000 AmeriCorps members recruited more than 1.7 million volunteers, according to the Corporation for National Service. National service is a force-multiplier.
Most important, a national service program could help achieve another Obama campaign pledge that otherwise may prove too vague and ephemeral. He’s talked about building bridges among Americans. That’s nice but he can’t do that just through speeches.
Common action breaks down barriers better than talk. Conservative churchgoers and secular liberals end up respecting the sincerity of each other’s beliefs when they work together to feed the hungry. Race relations improve more when black, white and brown together save a drowning city than when they attend sensitivity workshops. Interfaith dialogue is less effective than interfaith house-building. And those from military families and those raised by, say, environmental activists will find mutual respect by working together to care for veterans or solve other critical problems.
In fact, the call for service shouldn’t be limited to AmeriCorps. Imagine, for the first time ever, a national recruitment drive for all forms of service. Unlike past efforts, this significant recruitment effort – including YouTube videos, Facebook applications, mobile phones etc — should call people to serve in the military, the Peace Corps, AmeriCorps, senior corps, as well as private or faith-based service programs such as the Jesuit Volunteer Corps.
Oh, and by the standards of this economic recovery package, national service is dirt cheap. According to press reports, the economic recovery will cost around $800 billion and create 3 million jobs. By contrast, fielding a full-time AmeriCorps member costs the government somewhere between $11,000-$20,000 including an $4,725 educational scholarship, substantially cheaper than the infrastructure jobs.
So for a miniscule fraction of the recovery plan, we could field roughly 250,000 national service corps members (what Obama promised to do in the campaign, by the way). Add a few billion more, and wrap together military, overseas and private service, and Uncle Sam could finally make a simple, historic, transformative statement: “anyone who wants to serve their country or community in full time service – and then earn money for education – can do so.”
A massive, voluntary national service program would accomplish both hard goals — trees planted, houses weatherized etc — but a soft goal as well: planting forever the idea in the minds of most young people (and many seniors) that one of the most fulfilling and useful things they could do is serve their nation for a year or two. We’re in a crisis. Rather than the government just stepping in, shouldn’t we be giving idealistic young people the chance to help solve problems?
This idea may not seem as concrete as a bridge project but in its own way it could be even more durable.