Greed is not just the province of wealthy bankers. The stampede at a Walmart on Long Island reminded us that greed, one of the classic Seven Deadly Sins, can grip anyone, anywhere. From the New York Daily News account about the death of 34-year-old temporary employee, Jdimytai Damour

Roughly 2,000 people gathered outside the Wal-Mart’s doors in the predawn darkness.
Chanting “push the doors in,” the crowd pressed against the glass as the clock ticked down to the 5 a.m. opening.
Sensing catastrophe, nervous employees formed a human chain inside the entrance to slow down the mass of shoppers.
“They took the doors off the hinges,” said Wal-Mart worker Jimmy Overby, 43. “He was trampled and killed in front of me. “…
Even officers who arrived to perform CPR on the trampled worker were stepped on by wild-eyed shoppers streaming inside, a cop at the scene said.
“When they were saying they had to leave, that an employee got killed, people were yelling, ‘I’ve been on line since Friday morning!'” Cribbs said. “They kept shopping.”
“I look at these people’s faces and I keep thinking one of them could have stepped on him,” said one employee. “How could you take a man’s life to save $20 on a TV?”

In Inferno, Dante decided that the punishment for avarice should be having your face pressed into the earth for eternity (in Circle 4)–a reminder that you had cared too much about earthly concerns. 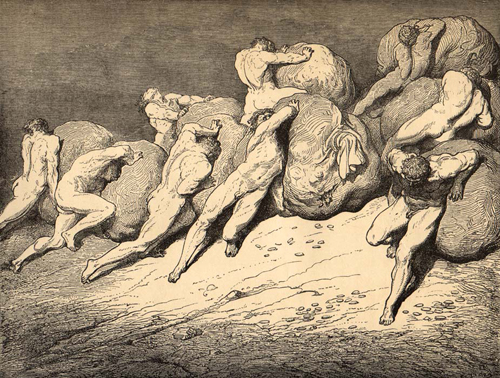