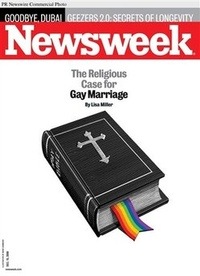 I worked at Newsweek as National Correspondent in the 1980s and 1990s, and even back then, the newsmags were in an identity crisis. I laughed out loud when I read in today’s Wall Street Journal that Newsweek honchos are considering making it more like the Economist because I remember when that idea was (repeatedly) suggested to top brass in the 1980s they’d invariably respond with something like, “What, you mean have 100,000 readers?”)
The problem back then was that the traditional newsmagazine function of summarizing and analyzing the week’s events had long since been taken over by newspapers (which were in search of their own rationale, as people turned to local TV for the daily news). The internet has only exacerbated the newsmagazines’ quandary.
Back then, there was much discussion about the newsmags solving the problem by having “more edge.” But we were never willing to go all the way. We wanted edge — an undefined sense of non-newspaperiness — without out being one sided or choosing a team in the culture wars. So we often substituted “attitude” for opinion, which sometimes meant more ironic detachment and an ideology of light contempt for American leadership in general. It was an awkward adolescent period.
It looks like Newsweek, in the face of an economic disaster, has decided to do the full monty, becoming an out-and-out opinion-oriented magazine.
The problem is: the readers never got the memo. Most people thought newsmagazines were supposed to be objective and have not been aware of the two decades of soul-searching about how to insert more opinion. So suddenly they wake up and this magazine that used to be balanced has come out of the closet as an overt opinion magazine.
And come out they did! The cover not only argues for gay marriage but takes sides in the raging theological wars over how to interpret the Bible. The correct way, says Newsweek: “Biblical literalists will disagree, but the Bible is a living document, powerful for more than 2,000 years because its truths speak to us even as we change through history.” The article’s author, Lisa Miller, notes instances of Biblical characters who are adulterers and polygamists and concludes that “no sensible modern person wants marriage — theirs or anyone elses — to look in its particulars anything like what the Bible describes.”
Most stunning was editor Jon Meacham’s defense of the cover story, in which he says “this conservative resort to biblical authority is the worst kind of fundamentalism.” He goes on to say, “This argument from Scripture is dirfficult to take seriously–though many, many people do–since the passages in question are part and parcel of texts that, with equal ferocity, forbid particular haircuts.” He predicts that “history and demographics are on the side of those who favor inclusion over exclusion.”
I’ll deal in another post with the story’s substantive argument – Newsweek does raise some very legitimate and provocative points – but for now my head is just spinning about the transformation of the newsmagazine. This cover may ultimately become known less for its significance in the culture wars but as a watershed in the history of American journalism.
read next post

Humbug! I Flubbed the Holiday Movie Quiz
archives most recent
More from Beliefnet and our partners
previous posts