The 28,000 Babies That Die in the Seventh Trimester 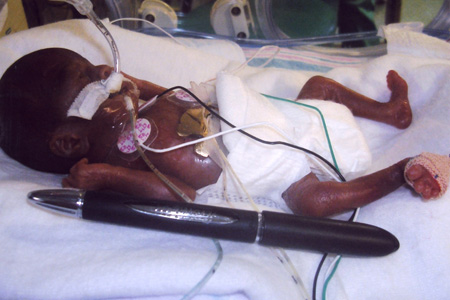 Number of fetuses/babies aborted in the U.S. during the third trimester: 2,400

Number of babies that die in the U.S. in their first year of life: 28,000
During the debate, the candidateas talked about late term abortions, which affects 2,400 cases, and “born alive” babies, which are even fewer. Now, the McCain campaign is phoning voters in swing states about the same issue. Fine. Those are legitimate issues.
But I’m struck that there was not a single mention in this debate — or any of the dozens of others — about the 28,000 babies that die each year in their first year, or to use the parlence of the abortion dabete, within twenty one months of conception.
Perahps we just think of these as inevitable. Proof these are not inevitable: the United States now has either the 29th best infant mortality rate (CDC) or the the 42nd best infant mortality
rate (CIA) in the world. Among the countries that, according to the CIA, have a better infant mortality rate than the U.S.: Singapore, Macau, Anguilla, Slovenia, Malta and Cuba.
I mean this as no diminution to the abortion issue but more babies’ lives could be saved through a concerted effort on infant mortality — largely through better prenatal care among the poor — than through a late term abortion ban.
We can argue whether there’s a moral difference between a seven month fetus dying because of a mother’s decision and an infant sentenced to death in her first year because of bad prenatal care, but I suspect it’s a distinction that would not be meaningful to the dead baby.
As far as I can tell, there has been not a single question on this topic during the previous 39 debates. And, I can find no mention of the topic on the websites of:
The U.S. Catholic Bishops
Family Research Council
Barack Obama
John McCain
NARAL
Why?

read next post
Are You In a Pro-America Part of the U.S. or an Anti-America Part?
archives most recent
More from Beliefnet and our partners
previous posts