George Harrison’s Other Claim to Fame: The Charity Rock Concert 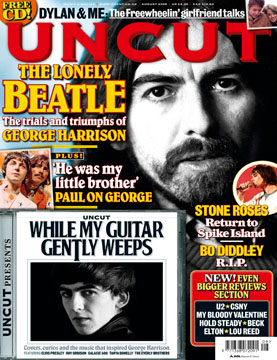 I’ve long considered George Harrison to be probably the most spiritually significant rocker. He introduced eastern religion in ways that influenced the rise of meditation, yoga and other practices in the United States.
A new cover story in the British magazine Uncut indicates that we have Harrison to thank for something else: the charity rock concert. His Concert for Bangladesh pulled togetther Bob dylan, Eric Clapton and other stars to raise money for the famine-stricken area.
Comedian Michale Palin:

“To have a concert for Bangladesh–who was interested in Bangladesh? Yes, it ws a terrible tragedy, a terrible mess, but pop stars didn’t get invovled in things like that. George was a real pioneer.”

“He must be given credit for that. It was the first big disaster that rock ‘n ‘roll had responded to. Typical of George, he did it right.”

The article described Harrison as on a lifelong spiritual quest. “He changed religions a whole bunch of times,” one friend said. “He was trying to find God. He told me he wanted to to God.”
I was glad to see that though McCartney and Harrison had become a bit estranged (McCartney describes telling Harrison to stop interjecting guitar riffs into Hey Jude), they spent beautiful time together about ten days before Harrison died. “We held hands,” McCartney said. It’s funny, even at the height of our friendship — as guys — you would never hold hands. It just wasn’t a Liverpool thing. But it was lovely.”

Workers On Fire, In a Sea of Sweet Sugar
archives most recent
More from Beliefnet and our partners
previous posts