Obama’s Prayer at the Western Wall 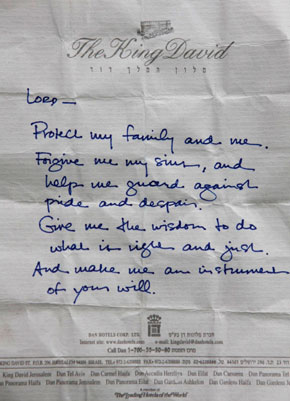 After Barack Obama stuck a written prayer in the Western Wall in Jerusalem, as is the custom, some college student swiped it and eventually gave it to a newspaper, which published it.

“Lord–Protect my family and me. Forgive me my sins, and help me guard against pride and despair. Give me the wisdom to do what is right and just. And make me an instrument of your will.”

So many thoughts. First, was it appropriate to publish Obama’s private prayer? One newspaper apparently had the prayer but refused to publish it. A Rabbi declared that this was a violation of Obama’s personal relationship with God.
At the risk of further inappropriate scrutiny of Obama’s soul, let’s fisk the prayer:
“Lord–Protect my family and me.”
Kirbyjon Caldwell — Bush’s pastor who is now a big Obama supporter — said that when he asks Obama what people should pray for, he invariably says, “his family.” This is not startling or uncommon. The Beliefnet-US News survey found that 57% said they prayed for family compard to 2.9% who prayed for strangers. Still, running for President poses a moral dilemma for anyone who cares about the family. Will the benefits of fame, influence and power be worth the potentail harm to someone being raised in the White House.
“Forgive me my sins”
For all the talk about the social justice emphasis of Obama’s theology (fueled here), he consistently speaks in terms of personal sin (and salvation). Note he did not pray for world peace or an end to poverty. He prayed for personal redemption.
“Help me guard against pride and despair”
One can’t help but wonder whether these are the challenges he is facing most these days.
“Give me the wisdom to do what is right and just. And make me an instrument of your will.”
Liberals used to whack Bush for making comments like this. Will liberals complain when Obama asks for this? If a candidate believes in God, isn’t this what you would want them to be praying for?
What did you think of the prayer?