Is Obama Out-Religioning The Republicans? 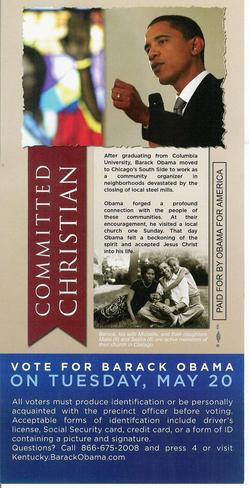 In case you couldn’t read the fine print on the faith-based pamphlet Barack Obama is distributing in Kentucky, here’s the key line (next to the big headline “COMMITTED CHRISTIAN”):

“Obama forged a profound connection with the people of these communities [in Chicago]. At their encouragement, he visited a local church one Sunday. That day Obama felt a beckoning of the spirit and accepted Jesus Christ into his life.”

I really cant recall a major candidate, including George Bush, being this explicit about his internal faith journey on official campaign literature.

His material in South Carolina went even further. One panel, “Called to Bring Change,” declares, “We do what we do because God is with us.” Another panel, entitled “Barack on the Power of Prayer” states:

“I believe in the power of prayer. Through prayer, not only can we strengthen ourselves in adversity, but we can also find the empathy and the compassion and the will to deal with the problems that we do control. What I pray for is the strength and the wisdom to be able to act on those things that I can control. And that’s what I think has been lacking sometimes in our government. We’ve got to express those values through our government, not just through our religious institutions.”

“Kneeling beneath that cross on the South Side, I felt I heard god’s spirit beckoning me. I submitted myself to His will, and dedicated myself to discovering His truth and carrying out His works.”

Me thinks Democrats need to think twice, now, before complaining that Republican candidates insert religion into their campaigns too much.

read next post
Are We a Christian Nation?
archives most recent
More from Beliefnet and our partners
previous posts