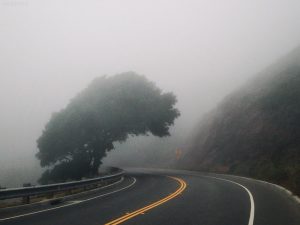 Headlights on a car only illuminate approximately 150 feet in front of a car.  That means when we are driving at night, we are assuming that the road will continue beyond that and we are putting our entire faith and security in that assumption.

Recently, while driving back to NC from the mountains of VA, I had to cross a large mountain range that was fully encompassed in fog.  The variable speed limit signs had been reduced to only 30 mph and cars and trucks all around me drove with their hazard lights flashing as they proceeded with caution.  It was a very precarious trip to say the least.  But instead of driving with my hands tightly gripping the wheel, I remained relaxed and trusted that as long as I kept moving – slow and steady – everything would be okay.

And God took that opportunity to remind of the very same thing, except on a much larger scale.

See, I, like many people, like to plan ahead.  I like to be in control, to know what’s coming.  And God has been working overtime to break me of that habit.  Because the truth is, we don’t need to know all the how’s, when’s and why’s.  All we need to do is stay in God’s will, trust that He knows best and that all His plans are for our good, and keep moving forward.

He reminded me that day on the mountain, that I don’t need to know what’s coming up tomorrow, next week, next month or even next year.  All I need to do is focus on that 150 feet in front of me – today – and take the very next step.  Nothing more, nothing less.  And as I continue to take that next step, He will continue to go before me as I take the next step and the next…

God has already gone before you.  He knows what lies ahead.  And He will prepare you with whatever you need before you get there.

On another day, on another road (what can I say… God likes to teach me while I’m driving), God spoke to me again.

I was sitting at a red traffic light, watching an old pick-up truck make a left turn from a perpendicular street.  It was pulling a large washer and dryer that appeared to be barely holding on to a small wooden trailer by one thin bungee cord.  But the driver seemed to be without a worry in the world, as he swiftly turned left and immediately accelerated down the road in front of me.

I had the thought, “Wow, He sure has a lot of faith in that little bungee cord!”

To which God suddenly replied, “If you have that kind of confidence in Me, you can move quickly too.”

He sure knows how to drive home a point, doesn’t He?

I had been struggling with putting my entire faith in Him.  With fully letting go of my controlling tendencies and putting every last part of my life entirely in His hands.  But it wasn’t until that moment did I realize what a disservice I was doing to both myself and Him.

When we hesitate to trust, when we hold back on our faith… we prevent ourselves from being able to move forward in God’s plan for our lives.  We don’t receive God’s best for us and instead, get stuck in worry, fear and passivity.

Like the driver of that little truck – we need to have faith and know that God has us.  So we can then move forward with full confidence, faith and courage.

Because the truth is, God is in control.  And we are safe in His hands.