The Shortest Distance Between Two Points…

… You know the rest.

But even though a straight line might be the shortest distance between two points, it’s not always the best way to get there. 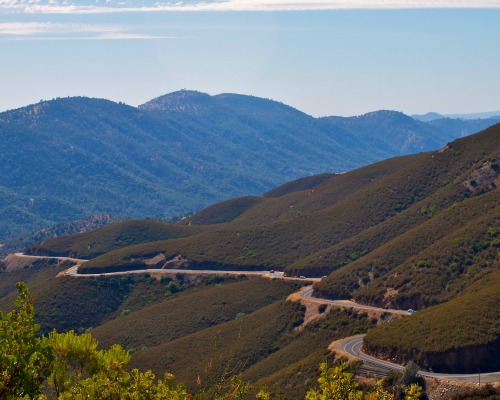 When engineers design a highway, especially ones that cross over a mountain or mountain range, they often incorporate lots of twists and turns, rather than making it just a straight shot.  How come?

Well, for one, it can be a lot safer.  If a straight road would cross over a river, a swamp or lead to a dangerous cliff, it would obviously be safer to curve the road around the hazards.  A winding road can also keep drivers more alert, especially truck drivers or other long distance drivers who may get stuck in “highway hypnosis” after miles and miles of straight-shot driving.

There may also be an issue with land ownership along the route of the road.  If the area the road will cross through belongs to someone else, it may be easier to simply wind around the property, rather than engage in a long legal battle.  It may also save extra time and money.

The ground along the path may not be secure enough to withstand construction of a road either.  A shaky foundation could result in a disaster during construction or even worse, after the road is complete.  So, engineers must do careful planning ahead of time.

But the main reason for winding roads that go up a mountain or other incline, is to make climbing them easier on the vehicles.  A straight shot up a steep incline can put a lot of pressure on the engine of a car or truck, whereas a road that climbs the elevation by slowing curving back and forth will require less power.  It also prevents heavier vehicles from being at risk for toppling over backwards.

There is a lot of thought and planning put into the process.  Roads aren’t just thrown up all willy nilly.

And neither is your life.

God is the ultimate engineer and He put a lot of thought and planning into your life, long before you were even born.

And just like the engineers who build the highways, He has laid your path out the way He has for a purpose.

You may be frustrated that it’s taking longer than you’d hoped to reach a certain point in your life.  But God may be taking you on the “scenic route” to keep you safe – winding you around the pitfalls, the hazards and the traps He doesn’t want you to fall into.

You might also think you know where you should be going… down the same path that you see all your friends and family taking… but God may have something different in store for you.  That life belongs to them, but not necessarily to you.  He may be saving you time and saving you money by keeping you from going down a path that was never yours to begin with.

Or He may not think you are ready yet to get to the destination.  You may be in a hurry to get there, but God may know that the foundation isn’t quite strong enough yet.  There may be more work that He wants to do in you before you brings you to the next point in your life.  He wants to make sure that you can withstand the next things that are coming and keep you from falling into a disaster.

But of course, in the end, God wants to make sure that you have enough power for the journey.  Life is not always going to be easy, but He does want to always equip you with what you need to get through.  Sometimes a straight shot to where you want to be comes with too much stress, financial risk, health risk or too much pressure.  And God wants to protect you from that.

He will still help you get to the destination and will be with you every step of the way.  But He’ll do it gently, slowly and on His time.

Which in the end, is really the greatest gift that He can give us.

So, don’t rush.  Take your time and enjoy the scenery.

Before you know it, you’ll be at the top and wonder why you were in such a hurry in the first place.