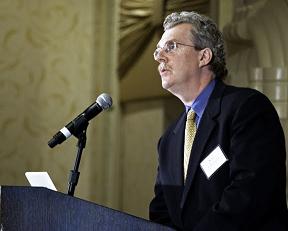 Recently BioLogos‘ Karl Giberson was interviewed by Marcio Campos for the Brazilian newspaper Gazeta do Povo‘s Tubo De Ensaio (i.e. “Test tube”) section. What follows is a translated transcript of that interview, which we will be posting in three installments. Here is the first.

Campos: Starting on more of a lighter note, when I read the subtitle “How to be a Christian and believe in Evolution,” I remembered an article by Pepperdine professor Douglas Swartzendruber, published last July, saying that we don’t “believe” in evolution the way we “believe” in God, angels or Santa Claus. Yet that’s how people are asked in polls: “do you believe in evolution?” I’d like you to comment on this choice of words. Has evolution become a “belief”?

Giberson: Your question spotlights a significant issue in this whole controversy–what do people think the words we are using really mean? Many people think “evolution” means “an atheistic story of origins.” If you ask a religious person do they believe in evolution, many thus feel bound to respond “Of course not.”

There are two senses of the word “believe” that I think are relevant here. In the literal sense, “believe” can simply mean to “accept as true.” We all “believe” that 2 plus 2 is 4. This bland sense of belief would apply, I think, even to people who believe in God but for whom that belief has no consequences. My guess would be that many deists believe in God like they believe in the laws of physics–something “out there” that exists but does not really engage them at any deep level.

But there is a sense–and I am sure this is what Swartzendruber is getting at–in which “believe” carries a more substantial meaning. My “belief” in God engages me in meaningful ways that my belief in gravity does not. However–and here I might depart from Swartzendruber–I think that belief in evolution can also engage one in deeply personal ways that go beyond mere assent. My belief in evolution motivates me to reflect on how I am related to all of life; how I am embedded in the natural history of the universe; how I should treat animals; what I should think about primates; and so on. I think evolution has a sort of transforming power that can change the way one relates to the world around them–in ways that are not unlike belief in God.

Campos: A recent Pew Forum research on how Americans and scientists view evolution and the science-religion relationship says that while 31% of the general public claim that humans and other living things have existed in their present form since the beginning of time and 32% say they evolved over time due to natural processes, other 22% say they evolved over time “guided by a supreme being”. How to analyze this last number? Is this “guided evolution” possible, or do you see this expression as a disguise for ID or similar views?

Giberson: ID is not really a particular viewpoint. Their “big tent” is so big it includes people that have very little in common: 1) interventionists who accept evolution as long as God tinkers from time to time in detectable ways; 2) young earth creationists; 3) old earth creationists; 4) and even people who don’t believe in God. The most recent ID book, Signature in the Cell by Stephen Meyer, argues that God created the first cell and then natural selection took over and did the rest–a sort of “biological deism.” ID is really more of a political movement where anti-evolutionists have agreed to set aside their considerable differences and join forces to wage war on evolution. The political character of ID is becoming increasingly apparent and there are signs the movement may be dying.

“Guided evolution” is accepted by many people, especially scientifically informed Christians. It appears under different labels like “theistic evolution,” “evolutionary creationism,” and “BioLogos” the term we are using for our project–chosen to get out from under the negative baggage associated with the word “evolution.”

The idea of God guiding evolution is actually very complex. To be meaningful, we cannot simply accept the secular story and say “God did it.” We need to make some theologically sensible claim about what God is doing and how God is involved in the process.

So let me respond with a helpful anecdote. When I teach evolution to evangelical students at Eastern Nazarene College they are often uncomfortable with the idea that God might work, somewhat invisibly, “through” the laws of nature. This does not seem like the God of the Bible who speaks from burning bushes, makes Eve from Adam’s rib, and rains fire and brimstone down on Sodom and Gomorrah. I always ask my students “How many of you believe that God guided you to Eastern Nazarene College?” Most of the hands go up. Then I ask “How many of you received this guidance through dramatic, supernatural interruptions of the natural course of events?” All the hands go down.

The conclusion is obvious: if God can “guide” people by working “through” the normal course of every-day events, then most certainly God can guide natural history by working through the laws of nature. This differs in one important way from all the ID positions–it does not require that God interrupt the natural course of events to “occasionally” do some of the creative work. Rather it views God as inhabiting the entire process.