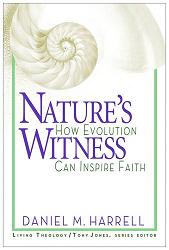 Every Friday, “Science and the Sacred” features an essay
from a guest voice in the science and religion dialogue. This week’s guest entry was written by Daniel M. Harrell, a minister at Park Street Church in Boston and author of Nature’s Witness: How Evolution Can Inspire Faith.

I recently led a seminar on faith and science at a large Christian music festival (of all places) in rural Illinois. While the reception was gracious (befitting Midwestern hospitality), there were those for whom any allowance of evolutionary thinking amounted to theological heresy of the highest order. One pugilistic gentleman bulldogged me all week, insisting that geologists and biologists were misguided and mistaken. And yet as I listened to his harangue, it struck me that the real issue was not that humans and monkeys are close cousins, or that the will of God looks willy-nilly when it comes to genetic mutation, or that organic life requires an enormous amount of death and decay to occur. No, his real concern was Biblical authority. If the world was not created by God in six days (like the Bible says) and people were not made in God’s image (like the Bible says) according to divine purpose (like the Bible says), then why should he believe that Jesus rose from the dead for his sins (like the Bible says)? If evolution is right, then the Bible is wrong?about everything.

But what if, instead of the Bible, it is our reading of the Bible that is incorrect? What if the realities of nature mean we need to rethink the way we understand Scripture? Now I know that just because a particular theory makes sense of the way something could have happened doesn’t necessarily mean that it actually happened that way. But if evolution provides an accurate description of life on earth, how might we rethink what the Bible says? To rethink what we think about the Bible is not to rewrite Scripture, nor is it to capitulate to Christianity’s detractors. Instead, rethinking and reworking our theology in light of accurate scientific data results in a more dependable and resilient theology. To be a serious Christian is to seek truth and find it as revealed by God both in Scripture and in nature. If God is the maker of heaven and earth, as we believe, then the heavens and earth, as science describes them, have something to say about God. Natural selection need not imply godless selection. To be reliable witnesses of creation can’t help but make us more reliable witnesses to the Creator.

As interpretive human endeavors, science (which interprets nature) and theology (which interprets Scripture) are unavoidably limited and prone to error. Humility is required to do both. And yet, when interpretation gets it right, we should expect science and theology to concur inasmuch as nature and Scripture both come from God. That science convincingly shows the earth to be 4.5 billion years old means that “day” in Genesis must mean something more than a twenty-four hour period. That hundreds witnessed the resurrection of Jesus and billions more have been changed by the risen Christ means that death is not the complete end of life. Maybe what looks like willy-nilliness is really God’s will. What if God intends for the free-processes of evolution to operate as they do in order to result in free-willed people who look like God? Moreover, while evolution allows that nature could have turned out differently than it did, the fact that nature did not turn out differently but actually moved from simplicity toward greater complexity and climaxed with humanity makes divine purpose, intentionality and ingenuity plausible. What if the eons of organic death and decay prior to humanity’s appearance manifest God’s own sacrificial generosity?previewing the massively sacrificial generosity that occurred on the cross? Nature and Scripture can be read together.

After each of my seminars at the music festival, it was common for a crowd to gather outside to continue the discussion. In one such circle, a young man sadly described his loss of faith as a result of a freshman biology class. His theology was not equipped to embrace the onslaught of scientific evidence. When push came to shove, he had to go with the science. He bought my book in hopes of discovering a convergence between science and faith that would enable him to believe again. But he admitted that he had serious doubts as to whether that could ever happen.

As a minister in a stalwartly evangelical church in Boston, I’m accustomed to university students getting hammered by their biology classes and then coming to me for reassurance that God still exists. It’s easy to assure them that God is still there. What’s hard is getting them to think differently about God. And yet throughout Scripture, people were always coming up against a God who defied their expectations. From Moses atop Mt. Sinai to Jesus’ own disciples, to Paul on the Damascus Road and John on Patmos?God consistently revealed himself in ways that even the most faithful found hard to believe. But that’s as it should be. Faith is not fantasy. It is grounded in the reality of the way things are rather than in the way we want things to be.