Evolution and the Problem of Evil 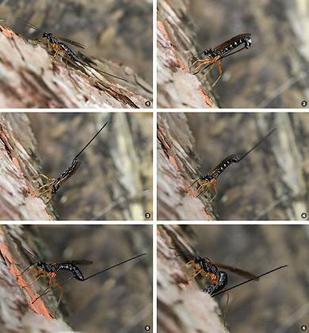 Bill Dembski, on his anti-evolution blog Uncommon Descent, has launched a peculiar assault on Darrel Falk’s recent piece on this site about irreducible complexity. Dembski’s complaint is so naïve, it has me wondering whether he has simply given up on serious engagement with ideas.

Falk’s post made a basic point that believers have wrestled with as long as there have been believers: The natural world has some terrible creatures in it, and it is hard to imagine God intentionally designing such nasty things. In 1860 Darwin even raised this in a letter to the American biologist Asa Gray:

“I cannot persuade myself that a beneficent & omnipotent God would have designedly created the Ichneumonidae (wasp) with the express intention of their feeding within the living bodies of caterpillars [see picture above], or that a cat should play with mice.”

Creationists have long tried to wriggle off this particular hook by arguing that the nasty features of the world are the consequences of human sin–by-products of the curse. But the truly nasty stuff precedes the appearance of humans, which makes this argument suspect at best. More serious, though, is the point that Falk was making, calling attention to the dark underside of the Intelligent Design movement, where he notes that “some of the by-products of natural selection are intricate structures that can fashion cellular machines that are able to harm us, just like the machines that we humans make.”

Readers familiar with the Intelligent Design literature will recall that the various “irreducibly complex” structures in nature that get all the attention are either helpful to humans, like the blood-clotting mechanism, or delightfully cute, like the little motor on the bacteria. These are rhetorically effective examples to use, of course, but we need broader consideration of complexity in nature that includes complex machines that are not warm and fuzzy and appear designed to inflict pain or induce death.

Falk makes the highly significant point that we must not ascribe the origin of these sinister features of the natural world to God. The God of the Judeo-Christian Christian would not play such a cruel joke on mice as to design cats to torture them. Nor would this God give the bacterium that causes Bubonic plague its remarkably well-designed power to kill some 200 million people over the past two millennia.

So where did these sinister designs originate? Some might respond too quickly that they come from Satan, but are we really to suppose that Satan is a “co-creator” of the world with God? This, suggests Falk with diplomatic restraint, “borders on heretical.” Satan, however construed, is a creature not a creator. To suggest otherwise is to embrace a famous heresy known as Manichaeism that St. Augustine flirted with as a young man.

Falk concludes “The Satan that we know from Christian theology is not a designer of life’s machinery. Those who wish to believe this are free to do so, but they have moved onto an island of scientific fantasy and perhaps even theological heterodoxy.”

The contribution evolution makes to this discussion–the point of Falk’s blog–is the remarkable discovery that nature has built-in creative powers. As Christians we affirm that these powers–which include the power to create both wonderful and terrible things–come from God, but they are wielded by nature. This is a traditional theological concept that understands that God works through secondary as well as primary causes.

The key point here, that Dembski claims to miss, is that the gift of creativity that God bestowed on the creation is theologically analogous to the gift of freedom God bestowed on us. Both we and the creation have freedom. Our freedom comes with a moral responsibility to use it properly. But that does not prevent us from doing terrible things. The freedom God gave humans was exercised most effectively in the construction of gas chambers at Aushwitz and Dachau. But, because humans have freedom, we do not say that God created those gas chambers. God is, so to speak, off the hook for that evil.

In exactly the same way, less the moral dimension, when nature’s freedom leads to the evolution of a pernicious killing machine, God is “off the hook.” Unless God micromanages nature so as to destroy its autonomy, such things occur. Likewise, unless God coercively micromanages human decision making, we will often abuse our freedom.

Dembski strangely misses this analogy, misconstruing it in the following way. He starts by noting that both Falk and the geneticist Francisco Ayala worry “that a God who creates by direct intervention must be held accountable for all the bad designs in the world.” They argue that evolution mitigates this problem by suggesting that “God set up a world in which evolution (by natural selection) brings about bad designs.”

He creates the following analogy, comparing God to a mugger. I read this several times to make sure I was not missing something, because the argument is so wrong-headed: “We never accept such shifting of responsibility in any other important matter, so why here? What difference does it make if a mugger brutalizes someone with his own hands (i.e., uses direct means) or employs a vicious dog on a leash (i.e., uses indirect means) to do the same? The mugger is equally responsible in both cases. The same holds for a creator God who creates directly by intervening or indirectly by evolution.”

This analogy completely misses the central point of Falk’s argument: freedom. When God grants freedom to creatures this means, in ways often difficult to understand, that those creatures can act independently of God, to not be robotic automatons or trained attack dogs. In the case of the holocaust, we always do exactly what Dembski says we never do: we shift the responsibility from God to the Nazis. Such reflections have long characterized Christian thinking about the problem of evil.

Falk’s argument is not new; it is a traditional argument recast to help us see that evolution can be a friend to faith. We can disagree about how helpful it is in mitigating the problem of evil but we cannot misconstrue it as Dembski has done.

Yesterday my freshman honors seminar discussed the problem of evil. Their reading included an essay from Martin Gardner’s The Whys of a Philosophical Scrivener titled “Evil: Why We Don’t Know Why.” At one point Gardner summarizes the Cambridge University theologian Frederick Robert Tennant: “Evil is the price we pay for existing. Moral evil is the necessary accompaniment of free will. Physical evil is the necessary accompaniment of structured world.”

This is a familiar argument, now understood by my freshmen students. Liebniz made a variation of it when he called this the “best of all possible worlds.” Ayala updated it in Darwin’s Gift to Science and Religion. I made it in Saving Darwin. Falk summarized it in the recent blog. I would love to see Dembski engage with it as I know he is capable of doing.