Why I Think the New Atheists are a Bloody Disaster 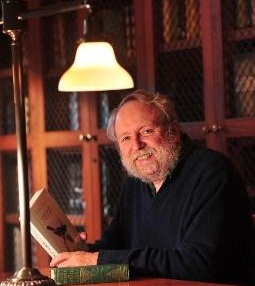 Every Friday, “Science and the Sacred” will feature an essay from a guest voice in the science and religion dialogue. This week’s guest entry was written by Michael Ruse, author and philosopher of biology at Florida State University. His upcoming book “Science and Spirituality: Making Room for Faith in the Age of Science“, published by Cambridge University Press, argues against the extremes of both creationism and “new atheism”.

In my seventieth year I find myself in a very peculiar position. Raised a Quaker, I lost my faith in my early twenties and it has never returned. I think of myself as an agnostic on deities and ultimate meanings and that sort of thing. With respect to the main claims of Christianity – loving god, fallen nature, Jesus and atonement and salvation – I am pretty atheistic, although some doctrines like original sin seem to me to be accurate psychologically. I often refer to myself as a very conservative non-believer, meaning that I take seriously my non-belief and I think others should do (and often don’t). If someone goes to the Episcopal Church for social or family reasons, or because they love the music or ceremonies, I have no trouble with that. Had I married a fellow Quaker, I might still be going to Quaker meetings. But I have little time for someone who denies the central dogmas of Christianity and still claims to be a Christian, except in a social sense. No God, no Jesus as His son, no resurrection, no eternal life – no Christianity. As it happens, I prefer the term “skeptic” to describe my position rather than “agnostic,” because so often the latter means “not really interested” and I am very interested. Like Thomas Henry Huxley, I am deeply religious in a total absence of theology. Unlike his grandson Julian Huxley (and others like Edward O. Wilson), I am totally uninterested in a “religion without revelation.” I loathe the term and the idea of “humanist.” One religion in this lifetime is quite enough thank you.

Without burnishing my halo too much, I think – and I warned you that I am a very conservative non-believer – that the most important parable is that of the talents and that in this lifetime, although never succeeding (thanks to my own moral frailty), I have tried hard to use that which has been given to me. In particular, I have striven to move beyond the comfortable life of a university professor – and I have been a full-time philosophy prof since I was twenty five – to engage in the public sphere on issues that I think morally important. Specifically, I have engaged in the science-religion debate – more precisely in the Darwinism-Creationism debate – for over thirty years. I have written on the subject, I have lectured regularly on the subject (on average, I give a talk about every two weeks and many are on this topic), and I have appeared as witness in a court case to defend the US separation of Church and State.

That the Creationists and fellow travelers, notably proponents of Intelligent Design Theory (IDT), would dislike my views I take as axiomatic. They should dislike my views for I spend my life fighting against these people. I say this notwithstanding the fact that, at the personal level, I have good and friendly relations with many of the leaders, including Duane T. Gish, Phillip Johnson, and Bill Dembski. I do not consider these people to be evil or motivated by money – anything but this latter, Gish could have made millions in the motivational speaking arena – although I deplore their beliefs and think them deeply dangerous. I will say however that I was disappointed that when Ben Stein tried to make me seem foolish in his movie Expelled, not one of them sprang publicly to my defense. Anyone who did not condemn that gross piece of distortion of the issues should feel really ashamed.

Which brings me to the point of what I want to say. I find myself in a peculiar position. In the past few years, we have seen the rise and growth of a group that the public sphere has labeled the “new atheists” – people who are aggressively pro-science, especially pro-Darwinism, and violently anti-religion of all kinds, especially Christianity but happy to include Islam and the rest. Actually the arguments are not that “new,” but no matter – the publicity has been huge. Distinctive of this group, although well known to anyone who studies religion and the way in which sects divide and proliferate, is the fact that (with the possible exception of the Catholic Church) nothing incurs their wrath than those who are pro-science but who refuse to agree that all and every kind of religious belief is wrong, pernicious, and socially and personally dangerous. Recently, it has been the newly appointed director of the NIH, Francis Collins, who has been incurring their hatred. Given the man’s scientific and managerial credentials – completing the HGP under budget and under time for a start – this is deplorable, if understandable since Collins is a devout Christian.

I am not a devout Christian, yet if anything, the things said against me are worse. Richard Dawkins, in his best selling The God Delusion, likens me to Neville Chamberlain, the pusillanimous appeaser of Hitler at Munich. Jerry Coyne reviewed one of my books (Can a Darwinian be a Christian?) using the Orwellian quote that only an intellectual could believe the nonsense I believe in. And non-stop blogger P. Z. Myers has referred to be as a “clueless gobshite.” This invective is all because, although I am not a believer, I do not think that all believers are evil or stupid, and because I do not think that science and religion have to clash. (Of course some science and religion clashes. That is the whole point of the Darwinism-Creationism debate. The matter is whether all science and religion clash, something I deny strongly.)

Let me say that I believe the new atheists do the side of science a grave disservice. I will defend to the death the right of them to say what they do – as one who is English-born one of the things I admire most about the USA is the First Amendment. But I think first that these people do a disservice to scholarship. Their treatment of the religious viewpoint is pathetic to the point of non-being. Richard Dawkins in The God Delusion would fail any introductory philosophy or religion course. Proudly he criticizes that whereof he knows nothing. As I have said elsewhere, for the first time in my life, I felt sorry for the ontological argument. If we criticized gene theory with as little knowledge as Dawkins has of religion and philosophy, he would be rightly indignant. (He was just this when, thirty years ago, Mary Midgeley went after the selfish gene concept without the slightest knowledge of genetics.) Conversely, I am indignant at the poor quality of the argumentation in Dawkins, Dennett, Hitchens, and all of the others in that group.

Secondly, I think that the new atheists are doing terrible political damage to the cause of Creationism fighting. Americans are religious people. You may not like this fact. But they are. Not all are fanatics. Survey after survey shows that most American Christians (and Jews and others) fall in the middle on social issues like abortion and gay marriage as well as on science. They want to be science-friendly, although it is certainly true that many have been seduced by the Creationists. We evolutionists have got to speak to these people. We have got to show them that Darwinism is their friend not their enemy. We have got to get them onside when it comes to science in the classroom. And criticizing good men like Francis Collins, accusing them of fanaticism, is just not going to do the job. Nor is criticizing everyone, like me, who wants to build a bridge to believers – not accepting the beliefs, but willing to respect someone who does have them. For myself, I would like America to have a healthcare system like Canada – government run, compulsory, universal. It is cheaper and better. But I engage with those who want free enterprise to be involved in the business. Likewise I engage with believers – I don’t accept their beliefs but I respect their right to have them.

Most importantly, the new atheists are doing terrible damage to the fight to keep Creationism out of the schools. The First Amendment does not ban the teaching of bad science in publicly funded schools. It bans the teaching of religion. That is why it is crucial to argue that Creationism, including its side kick IDT, is religion and not just bad science. But sauce for the goose is sauce for the gander. If teaching “God exists” is teaching religion – and it is – then why is teaching “God does not exist” not teaching religion? Obviously it is teaching religion. But if science generally and Darwinism specifically imply that God does not exist, then teaching science generally and Darwinism specifically runs smack up against the First Amendment. Perhaps indeed teaching Darwinism is implicitly teaching atheism. This is the claim of the new atheists. If this is so, then we shall have to live with it and rethink our strategy about Creationism and the schools. The point is however that the new atheists have lamentably failed to prove their point, and excoriating people like me who show the failure is (again) not very helpful.

I think that P. Z. Myers and his crew are as disastrous to the evolution side – and people like me need to say this – as Ben Stein is disastrous to the Creationism side – and the Creationists should have had the guts to say so. I have written elsewhere that The God Delusion makes me ashamed to be an atheist. Let me say that again. Let me say also that I am proud to be the focus of the invective of the new atheists. They are a bloody disaster and I want to be on the front line of those who say so.