The Vision Lives On 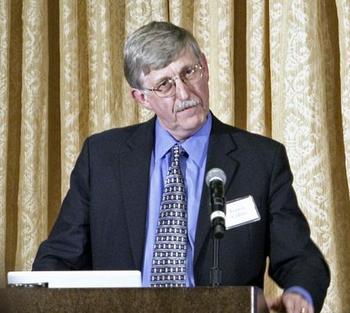 Every Monday, “Science and the Sacred” features an essay from one of The BioLogos Foundation’s leaders: Francis Collins, Karl Giberson and Darrel Falk. However, in light of the news of Francis Collins’s confirmation as director of the National Institutes of Health, we have posted a special weekly feature today. This entry was written by Darrel Falk.

Dr. Francis Collins has resigned as president of The BioLogos Foundation. After forming and guiding the foundation through its initial stages, he is stepping aside from a formal role in order to assume leadership of the National Institutes of Health.
Despite the seminal importance of this one unique and highly gifted individual, the organization will continue to fill a most important niche: to encourage a paradigm shift that shows that faith and science can exist in harmony. The need for this shift runs so deep in our culture that this project will not be derailed by the departure of one person, even when that individual is Francis Collins.

It is impossible to measure the massive harm that has been done by those who have tried to show that science and faith are in conflict. Multimillion dollar enterprises like the Creation Museum in Kentucky have sprung into existence. They exist for one purpose: to demonstrate — on the basis of their faith alone — that core findings of science are deeply flawed. On the other side, a host of science blogs and authors who sell millions of books argue that scientific data have demonstrated conclusively that there is no supernatural being, and those who put their faith in God are out of touch with reality. Science has spoken, faith needs to be eradicated. It is to this latter group that I especially want to address my comments as BioLogos moves into the post-Collins era.

When I speak to groups of evangelicals, I am sometimes asked if I can think of any potential finding of science that would cause me to lose faith. I enjoy reflecting on that question. Consider, for example:

In the three months since the public launch of The BioLogos Foundation, I would have thought the strongest negative reaction would have come from religious conservatives. However, a quick scan of the blogosphere indicates that evangelicals who hold a young earth perspective have been almost silent about BioLogos. Within the Intelligent Design community, it is not the Christians who have been most vocal; by far our most vocal critic has been an orthodox Judaist. With a few exceptions, it is evangelical Christians who have been the strongest supporters of our effort to show that science and faith can be brought into harmony. I suppose we now have thousands of supportive letters from evangelical Christians who indicate they have identified with our books and, more recently, with the purposes of The BioLogos Foundation.

Still, almost 50 percent of Americans believe that humans were created pretty much in their current form about 10,000 years ago. So, given this huge number of people and the antiscientific sentiment it represents, it is puzzling that by far the most vocal criticism of BioLogos has come from people who purport to serve the advancement of the scientific view.

America is in a quandary that could have very significant consequences for the future of science and thereby for the future of technology in this country. BioLogos was created to try to help people of faith see that science does not have it wrong. We do this as people of faith ourselves. We coordinate efforts to end this dichotomy between science and faith, even — and especially — evangelical faith.

Why is it that a group concerned about the advancement of scientific ideals is our most vocal opponent? We support science, including the science of evolutionary biology. We think this incongruity implies that for them the issue is not the preservation of science in our fragile world. For them, the issue is that they want to use scientific data to justify their own political and philosophical ends. They are trying to present science as claiming something it does not claim to justify their nontheistic view of the world. They want to rid the world of philosophies grounded in theism. It is clear from their writing that they have taken no time to carefully study the host of philosophers who are theists or the elegant theology of some of the world’s finest minds.

For starters, I recommend that their followers read Alister McGrath’s The Twilight of Atheism

. In one of our recent blogs, guest writers Chris Mooney and Sheril Kirshenbaum, who are agnostics themselves and authors of the book, Unscientific America

, show heartfelt concern about the misuse of science by these individuals. In the future, we hope that many followers of the new atheists will come to care enough about science that they too will work for harmony and not discord.

So Dr. Collins has moved on to other important endeavors, but the question of what to do about this gulf between science and faith has not disappeared. The answer is not to stamp out the faith element from this world as some people are bent on doing. That will not work. The answer is, however, to protect faith, to nurture it, to inform it and to edify it. The BioLogos vision, which is shared by many people, will live on much longer than any of us, and it will certainly not fade just because our dear friend Francis is involved in another important activity.

The vision lives on. We will work to provide Christian schools and homeschooling networks with material that is both scientifically sound and theologically sensitive. It will be done by working with church leaders and the many other Christians who already care deeply about this issue. Eventually, many others will come to understand the strength of the scientific data, and they will be shown why the basic tenets of their faith are preserved and, indeed, enriched. We will offer workshops, courses, book clubs and conferences. Our blog and web site will remain active, and we will sponsor the development of more books and other media that help us appreciate the awe and wonder of creation.

The BioLogos Foundation, built by Dr. Collins and fueled initially by his energy and enthusiasm, has now been set in motion and is moving rapidly down the track. He may be moving in a different direction now, but BioLogos has too much momentum and too many supporters for it to slow down as we move toward the looming vision of bringing harmony to the findings of science and the life of faith.

Darrel Falk is a biology professor at Point Loma Nazarene University in San Diego and executive director of The BioLogos Foundation.