The Ancient Science in the Bible 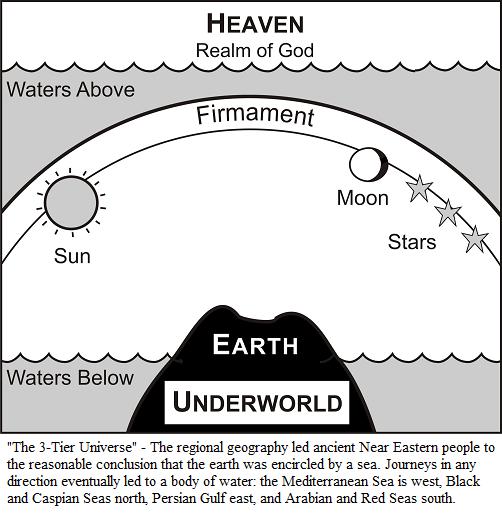 Every Friday, “Science and the Sacred” features an essay
from a guest voice in the science and religion dialogue. This week’s
guest entry was written by Denis O. Lamoureux, author of the books Evolutionary Creation and I Love Jesus and I Accept Evolution.

I am both an evangelical (born-again Christian) theologian and an evolutionary biologist. Stated another way, I love Jesus and I accept evolution. Of course, such a claim is not often heard in our churches. But if I am allowed only one argument to explain my views, it is this: the Bible is not a book of science, but a book to meet the Lord.

In fact, Holy Scripture features an ancient science of the structure, operation, and origin of the universe and life. The diagram presents the world as conceived by ancient Near Eastern peoples, including God’s chosen people, the Hebrews. It may come as a surprise to most Bible-reading Christians, but a 3-tier universe is found in the Word of God. A few of these ancient conceptions of the natural world include:

(2) A circumferential sea borders a circular earth. Proverbs 8:22-31 and Job 26:7-14 describe the creation of the world. The former states, “God inscribed a circle on the face of the deep” (v. 27); and the latter, “God has inscribed a circle on the surface of the waters” (v. 10). The Bible also asserts that the earth is circular. Isaiah writes, “God sits enthroned above the circle of the earth, and its people are like grasshoppers. He stretches out the heavens like a canopy, and spreads them out like a tent to live in” (Isa 40:22).

(4) A solid domed structure, termed the “firmament,” holds up a body of water over the earth. Created on the second day of creation, the firmament separated the “waters above” from the “waters below” (Gen 1:6-8). Notably, this heavenly dome and body of water did not collapse during Noah’s Flood. As the psalms of King David’s day reveal, “The heavens declare the glory of God and the firmament proclaims the work of His hands” (Ps 19:1); and God “stretches out the heavens like a tent and lays the beams of His upper chambers [i.e., God’s celestial temple] on their waters” (Ps 104:2-3).

(5) The sun moves across the sky. Created and placed in the firmament on the fourth day of creation (Gen 1:14-18), the daily movement of sun is found in King Solomon’s observation: “The sun rises and the sun goes down, and hurries to the place where it rises” (Eccl 1:5). It also appears in the psalmist’s praise, “The sun rises at one end of the heavens and makes its circuit to the other” (Ps 19:6).

Of course, many Christians are quick to point out that all of passages cited above are only “appearances” in nature. That is, these are phenomenological descriptions (Greek phainomenon: appearance). The earth “looks” flat, “seems” to be surrounded by water, and “feels” stationary; the sky gives the “impression” of being a blue body of water overhead; and the sun “appears” to cross the dome of the sky, rising and setting every day. However, to ancient peoples like the biblical authors and their readers, these are descriptions of the actual structure and operation of the universe. As history reveals, the notion that the earth was immovable and that the sun moved daily across the sky was part of astronomy up until the early 1600s. In fact, this was the issue of the Galileo controversy.

So what’s the bottom line? Don’t go to the Bible to find scientific facts; go to Scripture to meet Jesus. In the same way that the Lord personally meets each of us wherever we happen to be, the Holy Spirit came down to the level of the ancient biblical writers and employed their understanding of the physical world in order to communicate as effectively as possible life-changing spiritual truths. By using an ancient science in the Bible, God revealed the inerrant Message of Faith that He created the world, not how He created it.

For more on the ancient science in the Bible see:
Denis O. Lamoureux’s I Love Jesus & I Accept Evolution (2009), pages 43-70, and his website: www.ualberta.ca/~dlamoure