An Obituary for the “Warfare” View of Science and Religion 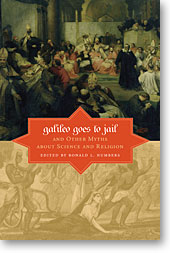 Every Friday, “Science and the Sacred” features an essay
from a guest voice in the science and religion dialogue. This week’s
guest entry was written by Edward B. (Ted) Davis, Distinguished Professor of the History of Science at Messiah College in Grantham, Pennsylvania and president of the American Scientific Affiliation.

As an historian of science, I belong to a small, somewhat esoteric club. Although there are dozens of colleges and universities within 75 miles of my own, there are no more than half a dozen faculty with similar expertise at all of those institutions combined. If we focus more narrowly on my particular specialty – the history of science and Christianity – then I am probably alone in Central and Eastern Pennsylvania.

Because we are rare birds, our influence outside of our own nests has usually been minimal, especially when it comes to science and religion – an area that seems to invite comments from anyone and everyone, whether or not they actually know anything about it. Our collective anonymity may now be changing, however, with the publication of a splendid new book from Harvard University Press, Galileo Goes to Jail and Other Myths about Science and Religion. The editor, Ronald L. Numbers, a former president of both the History of Science Society and the American Society of Church History, is a religious agnostic whose scholarship on the history of American religion and science is marked by meticulous accuracy and impartiality.

For a quarter century, Numbers and his colleague at the University of Wisconsin, David C. Lindberg, have led the way in challenging the commonly received view that the history of science and religion is best seen in terms of an ongoing, inevitable conflict, with science winning the war for cultural and epistemic territory. Although the conflict view ultimately derives from the European Enlightenment, its most influential expression was American. This is one of those cases in which you can judge the books by their covers – or, at least, by their titles. In 1874, NYU chemist John William Draper published his History of the Conflict between Religion and Science, and in 1896 the first president of Cornell, Andrew Dickson White, published A History of the Warfare of Science with Theology in Christendom. It is hard to say which one is worse, in terms of its scholarship, but my vote goes to White. Although he was a trained historian, White seems to have consulted primary sources about as often as he watched television. Consequently, his book is chock full of manufactured “facts,” invented or misattributed “quotations,” and unsupportable interpretations. Draper is not a great deal better, yet both books remain widely influential today, perhaps partly because the shoddy scholarship and outright nonsense they contain is central to the apologetics of contemporary unbelief. Why else would White’s contribution to historical fiction be available for free download at infidels.org and Draper’s book at positiveatheism.org?

The twenty-five authors in Numbers’ book – one for each of the short, pithy chapters – serve writ on the conflict thesis and its legacy. (To view the contents, go to here.) Many contributors, including Numbers and Lindberg, are major players in the history of science, and at least two will be known to many readers who rarely venture into the field: Edward Larson, whose book on the Scopes trial won the Pulitzer Prize in History, and Michael Ruse, a distinguished philosopher and historian who often writes for general audiences. (Full disclosure: I wrote the chapter on Isaac Newton, but I do not mean to imply that I am a major player and my enthusiasm for the book would be undiminished if I had not contributed to it.) Twelve contributors are agnostics or atheists (by their own statements) and eight are Christians, so charges of advancing a clear ideological agenda will not stick. All of us wrote with ordinary readers, not specialists, in mind, making this a truly rare book: where else can you find such authoritative scholarship delivered so accessibly and fairly on such an important subject?

In effect, this book delivers a public obituary for the warfare view, which has been dead among historians for decades – though many scientists, journalists, and others who know far less about the topic apparently missed the funeral. In fact, the real history of religion and science is too complex, with too many important subtleties and significant mutual interactions, to be captured by any simple metaphor – not conflict, not harmony, nor any other single word that comes to mind. The people who actually lived through the events – those we historians call the “actors” themselves – very often saw things quite differently from the ways in which we’ve usually been told they saw them, or must have seen them.

How will all this go down? Whenever historians engage in debunking popular misconceptions, there are always people who want to shoot the messenger rather than to accept the truth of the message – especially when the truth of a given misconception is important to one’s faith commitment. Numerous reviews by people from a range of faith commitments are readily available online; a detailed survey of their content is an exercise I leave to the reader. Those who need the warfare myth acknowledge the evidence but deny its significance; the facts about historical incidents are irrelevant to the logic of the arguments made now, they say, and anyone with half a brain knows that science is always triumphant over religion. Perhaps I ought to be more respectful: those whose minds are made up ought not to be confused by exposure to the facts.