Blessed is the Peacemaker 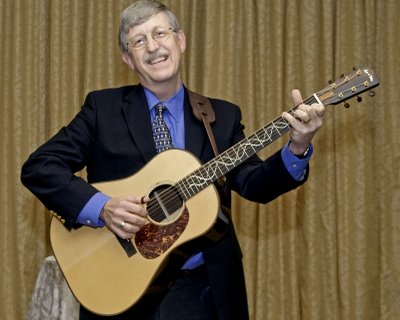 Every Monday, “Science and the Sacred” features an essay from one of
The BioLogos Foundation’s leaders: Francis Collins, Karl Giberson and
Darrel Falk. Today’s entry was written by Karl Giberson.

The news these days — especially in the BioLogos part of the world — is all about Francis Collins being tapped as possible head of the National Institutes of Health. If confirmed by the Senate, he will disengage from BioLogos and head a somewhat larger and more complicated entity.

I have worked closely with Francis at BioLogos and on a few other projects in the past couple of years. We’ve shared many meals, phone conversations and more e-mails than either of us cares to recall. (Several have gone back and forth while I was writing this blog. We have laughed, prayed and pondered together. I carried his guitar for him when he spoke at Gordon College at the opening of its new science building. I’ve stayed at his home and had this amazing soup that his wife, Diane Baker, makes. I am guessing President Obama hasn’t met Diane, a genetic counselor, or she would have been the one tapped to head the NIH, and Francis would be making the soup.

I understand that Francis has a great resumé as a geneticist; and he must be a talented administrator to have managed the Human Genome Project. No doubt these are the reasons he is being courted by the White House to head the NIH.

But there are some other, underappreciated reasons Francis is an extraordinary candidate for this job.

News reports note that he is “affable” or “folksy” and a generally nice guy. But these are mentioned in passing as if they are just miscellaneous characteristics, like his height (tall) or his hair (not thinning at all), his musical instrument (guitar) or his affinity for motorcycles (lunatic). The reality is that Francis has one of the most gracious and generous personalities I have ever encountered. I have seen him in contentious meetings, interacting with people who have attacked him in print, and with his personal grace he quickly vaporized all the hostility in the room like some kind of magical air freshener.

There are countless controversies that circle around the NIH, like vultures waiting to descend and wreak havoc: issues including stem cells, contraceptive research, universal health care, HIV-AIDS, gender priorities in research emphases (i.e., whether breast cancer or prostate cancer should get the most money). Francis’ ability to address these controversies as disembodied philosophical disagreements rather than personally driven agendas is a critically important skill for someone presiding over such a vast enterprise as the NIH. The fact that he is a nice guy will advance the agenda of the nation, if he is not killed driving his motorcycle around the national monuments.

Much attention — perhaps too much — has been paid to Francis’s personal faith commitments. He is a traditional religious believer–no doubt about it–with a testimony that resonates with most American Christians, which is to say, most Americans. The “new atheist” pundits and self-appointed gatekeepers of acceptable beliefs, however, are wringing their hands and wailing on their blogs about a religious believer presiding over so much science. These are same folks who belittled Francis’ book, The Language of God, bashed his BioLogos project, and who are now booing President Obama for selecting him to head the NIH. I think all this booing and bashing is completely misguided, especially when examined from a genuinely democratic perspective.

Francis sits on the bull’s-eye of America’s troubled, bi-polar personality, to use a strangely mixed metaphor. On the one hand, America is the scientific leader of the world; on the other, the country is deeply religious in ways that no other developed nation is. These two halves of our national personality often don’t get along. Every day, hostile arrows fly from the bows of the creationists into the camp of the scientists. And every night, laser guided missiles return along the same trajectory. Paralyzed public school teachers work hesitantly in the demilitarized zone of public education, teaching scary secular science to classes of frightened students. It is not going well, as our national test scores make only too clear.

As an important national symbol of science, Francis is the perfect mediator to bring peace to this situation. His deep religious faith connects him to the millions of Christians that may fear science. His scientific credentials connect him to a community that has grown weary of having to defend its work from attacks by religious fundamentalists. If there is any possibility for these two camps to make peace with each other, Francis is the person to do it, even if only as a symbol. I hope that cooler heads on both sides will realize that they should pull their fingers from their ears, stop chanting “la-la-la-la” and join Francis on the sparsely populated middle ground where he resides — maybe Diane could make some soup to entice them. America needs to do something about the frightening divide that separates her religion from her science.

In countless hours of conversation with Francis about science and religion, I have never heard him express any reservations about the integrity of the scientific enterprise. There is no basis for the concern that his religious views will interfere with his support for science. Likewise, he sees nothing in science that undermines traditional Christianity. And even when we may disagree with him — as I have on multiple occasions–he is occasionally wrong about stuff– Francis will never make the experience unpleasant.

Karl Giberson is executive vice president of The BioLogos Foundation and director of the Forum on Faith and Science at Gordon College in Wenham, Mass.