A Call for Peace in the Science/Faith Battle 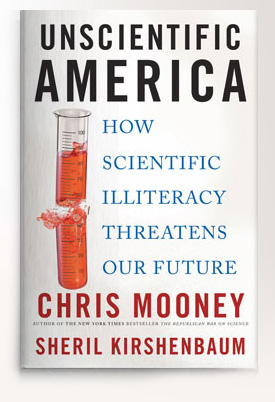 Normally each Monday “Science and the Sacred” features an essay from one of The BioLogos Foundation’s leaders. However, this week we welcome a special entry from guest contributors Chris Mooney and Sheril Kirshenbaum.

It is one of the oldest conflicts, one of the hardest fought, one of the most destructive. It is also, sadly, among the least necessary.

We’re referring, of course, to the supposed “conflict” between science and religion. In its modern form, the battle has been with us since the time of Copernicus and Galileo. It grew increasingly divisive during the Darwinian Revolution. And it has never really subsided since, but merely changed its form–with the latest incarnation being particularly bitter and nasty.

Today, the conflict pits the so-called “New Atheists”–Richard Dawkins, the science blogger PZ Myers, and many others–against not just conservative religious believers, but many others as well. For the New Atheists are willing to mix it up with anyone, even fellow atheists and agnostics, who question the need to repeatedly challenge the beliefs of the faithful, or to have an ongoing conflict over science and religion.

We found this out by accident at first–a science journalist and marine biologist, neither of us is personally religious. We were merely science bloggers, and slowly we became aware of something striking happening in our particular sphere of the Internet over the past several years.

Increasingly, the science blogosphere became the home to uncompromising attacks on all manner of belief, most prominently at the hands of PZ Myers of Pharyngula, widely considered the most popular science blogger on the web. In The God Delusion, Richard Dawkins denigrates “the weakness of the religious mind,” and Myers proceeded to carry that mindset out in practice. Addressing Catholics, Myers writes, “Don’t confuse the fact that I find you and your church petty, foolish, twisted, and hateful to be a testimonial to the existence of your petty, foolish, twisted, hateful god.”

Watching all this unfold, we couldn’t see how such battles advance the cause we centrally care about: The need to focus on science and its centrality to our future. After all, we live in a time when information about science is vanishing from the news media, and science education in our schools is in a perpetually lackluster state. Our nation is divided over all manner of scientific topics–climate change, evolution, stem cell research, vaccination. There is so much important work to do, and in this context, how can it possibly help to have leading scientists and science defenders busy assaulting religious beliefs?

Put simply, it can’t. So we decided to take a stand. It has cost us with some former allies, but in our new book Unscientific America: How Scientific Illiteracy Threatens Our Future, we said it strongly: The New Atheism has become a counterproductive movement, dividing us when we ought to be united. And this movement is not really about science, although it often aligns itself in this way. Science, alone, isn’t capable of saying whether God exists, and most scientists don’t obsess about such questions. Atheism is a philosophy that goes beyond mere science–a philosophy that its adherents have every right to hold, but that will never serve as a common ground that we can all stand upon.

The common ground, instead, must be science in its broadest sense–a shared body of facts we can all agree about, however we may differ about the spiritual. Yet this common ground itself is at risk if we let science and faith be in conflict.

And that’s why we’re here to call for much more cooperation and much more understanding between people from the world of science (like ourselves) and those who hold their faith dear. We’re here to make common cause–and also to remind you that not all of American science falls into the New Atheist camp. Not by a long shot.

Instead, it’s more like a house divided. Leading institutions like the National Academy of Sciences, The American Association for the Advancement of Science, and the National Center for Science Education see no need to challenge religious faith. It isn’t part of their job description nor is it helpful to the important endeavors they’re already engaged in. The New Atheists are the upstarts here and seem to want these organizations to change their policies and approach–but they haven’t yet succeeded.

In other words, science is not now the enemy of religion in America, and hopefully it won’t ever be. After all, the vast majority of Americas want nothing to do with this conflict. They want compromise, and compatibility. The New Atheists, although loud, don’t represent all scientists or even all atheists–much less all of the country.

So all we need is for the “silent majority”–often diffident, often drowned out by the extremes on either side–to get louder.

Next time you see the news media cover “science versus religion” as if it’s a battle, write or call in and say why that’s simplistic. The next time you find a scientist criticizing religious belief, email or call up and ask why it isn’t enough for us all to agree about the facts of science.

To this end, President Obama’s appointment of a scientist and man of faith, Francis Collins, to head the National Institutes of Health was a step in the right direction. Let us hope that it is only the beginning.

Chris Mooney and Sheril Kirshenbaum are the authors of the new book Unscientific America: How Scientific Illiteracy Threatens Our Future, and blog at “The Intersection”.