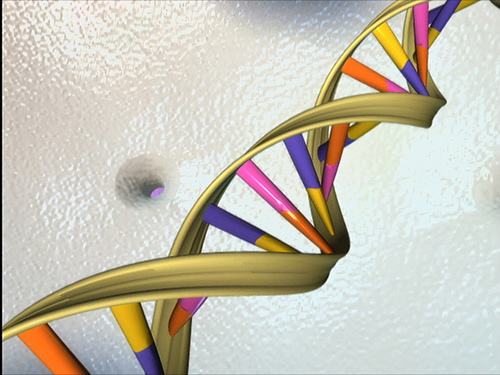 Source: National DNA Day / Flickr / All Rights Reserved
We have known for sometime that parents pass physical and behavioral traits through their genes to their children, but the exact physical explanation for why certain genes are chosen over others has remained unclear.  However, researchers from the University of Leeds have discovered a protein – known as REST – that is central in turning genes “on” or “off”, which in turn determines the selection of traits in offspring.  The protein works by binding with certain genetic sequences and either repressing or enforcing the expression of their associate genes.

Even more interesting, the researchers found that while REST regulates a specific set of genes in all vertebrates, the protein can act on a greater number of genes in mammals, especially in those associated with the brain.  Researchers hope more research may shed light on the evolution of intelligence in mammals.

The team is understandably excited by the find.  “Scientists have believed for many years that differences in the way
genes are expressed into functional proteins is what differentiates one
species from another and drives evolutionary change – but no-one has
been able to prove it until now,” says lead researcher Dr. Ian Wood.

The full press announcement can be found on the University of Leeds’s website.