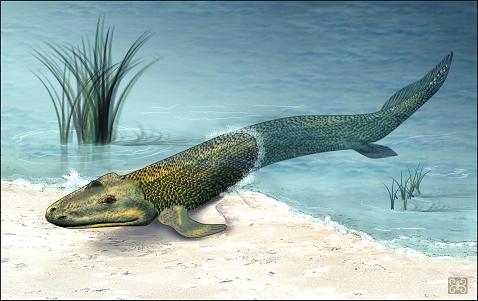 Every Monday, “Science and the Sacred” features an essay from one of The BioLogos Foundation’s leaders: Francis Collins, Karl Giberson and Darrel Falk. Today’s entry was written by Darrel Falk.

I am a fan of the blog “Jesus Creed.” Recently it published an interesting post about the transition from fins to limbs as evidenced by fossils of an organism trapped in sediment 375 million years ago.

The bones in the limbs of all land vertebrates are remarkably similar. Feel around your upper arm, you’ll only find one bone in there — the humerus. Now move to your lower arm. If you’re thorough, you will find two bones — the radius and the ulna. As you continue down to the wrist, there is a whole set of little bones that attach to the metacarpals of the hand and the phalanges of the fingers and thumb. If your dog is nearby, see if he will let you continue your experiment with him. His bones are arranged a little differently, but the setup is the same. This pattern is remarkably consistent in land vertebrates. Even marine mammals like whales have a humerus, then a radius and an ulna followed by smaller bones. Darwin noted this consistency in his book On the Origin of Species. He writes, “What can be more curious than that the hand of a man, formed for grasping, that of a mole for digging, the leg of the horse, the paddle of the porpoise, and the wing of the bat, should all be constructed on the same pattern, and should include similar bones, in the same relative positions?”

by paleontologist Neil Shubin. Shubin studies fossils of vertebrates that lived at the time of transition from water to land. As he began his project, Shubin knew that amphibian fossils were abundant in 365 million year old rock formations, but totally absent globally in formations older than 385 million years. So he and his colleague, Ted Daeschler, decided that if they were to find the intermediates between fish and amphibians, they would need to look for fossils in exposed rocks that were about 375 million years old. A simple search through a geology textbook told them only one rock formation would meet their criteria perfectly. This formation was in northern Canada and was formed by sedimentation in a river delta.

After a six-year-long hunt from 1998-2004, Shubin and his team unearthed a “fish” very different than anyone had ever seen before. They had isolated a transitional organism with many characteristics of the land animals that became abundant 10 million years later, but it also had many characteristics of fish that lived in the period just before.

The book is a fun read, and is perfect for all who truly seek to understand God’s method of creation. Here’s why Darwin would have loved the story though: Shubin predicted the characteristics of a transitional species, the age of the rock formation, the type of environment in which it would be found (a river delta) and the geographic location (northern Canada) likely to have these fossils. He and his team then went out and searched for six painstaking years — scanning the landscape inch by inch — until they found it. It was a transitional organism with a variety of interesting features such as a neck, which was new to vertebrate life, and scales, which were an old feature. It had a rib cage with new features that came to characterize land animals, and it had interesting limbs described in meticulous detail. Just like you and your dog, the organism had the same key bones in the right place: the humerus, the radius, the ulna, some of the bones of the wrist and even primitive bones of the foot.

As beautiful as this story is, it does not end there. Unlike Darwin, we now know how the specific bones of the limb are built in an embryo, and we know why the pattern is so similar among the various land vertebrates. There is a set of genes that produces signals in a developing embryo. The hox D family of genes becomes active at specific locations in a developing limb, and bone is made.

What this means is that one group of cells in the expanding “limb bud” gets the signal, “make bone here.” Further toward the tip of the limb bud, two blocks of cells receive the same signal, “make bone here.” These two blocks of cells respond by making the radius and ulna. A little bit later and further toward the tip of the limb bud, a second wave of expression of the hox D signal is active. “Make bone in this region too,” the signal says. The reason we all have the same pattern is that the hox D signaling pattern is very similar in the limb buds of the embryos for all land vertebrates. It can be tweaked to give variation in structure, but the basic pattern is virtually always present.

So what about the fins of fish? If fins gave rise to limbs in evolutionary history, one might expect they would have hox D gene expression which resembles that of limbs but would be different in a fairly significant way. The shark provides the best example; it has bones at the base of its fin. And, sure enough, in a shark embryo there is a wave of expression of the hox D genes in fin development just like in land vertebrates. Sharks don’t have tiny bones that might correspond to our wrist, hand and fingers, so there are significant differences in hox D gene expression at the tip. However, the signaling pathway was already present in the fins of fish. The signal that says, “make bone here,” was expressed in fish at the exact same location where limbs appear in land vertebrates. The transition had already begun as fish developed fins. At the most significant level, fins and limbs share important features.

I have been a biologist for a long time, and I hope I never stop getting shivers in my spine when I think about the beauty of how we come to know things in biology. Biologists make predictions, then they go out into the field or the lab to see if their predictions hold up. When hundreds of predictions of this sort are fulfilled, a theory reaches the point where it becomes certain, at least on a broad level. And that is where we are with evolution.

In this space, our purpose is not so much to try to persuade as it is to explain why we are so certain God created this way. If you wish to join us as we explore the ramifications, we would love to have you with us in the coming days. If you think that all of biology has it wrong, that is your prerogative. You’re still welcome to read and think along with us. A great place to start is the book by Neil Shubin–it is very accessible to the general audience regardless of science background. Once you’ve read that, irrespective of what you personally believe, you’ll understand why most Christian biologists view evolution as being God’s way of creating life’s diversity. It is my prayer that you may even see why the beauty in all of this draws us to our knees in worship.

Darrel Falk is a biology professor at Point Loma Nazarene University in San Diego and executive director of The BioLogos Foundation.