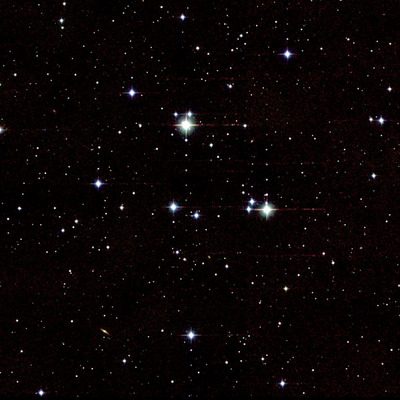 Atlas Image courtesy of 2MASS/UMass/IPAC-Caltech/NASA/NSF.
Christopher J. Corbally holds a doctorate in astronomy from the University of Toronto and is a Fellow of the Royal Astronomical Society and a member of the American Astronomical Society.  He is also a Jesuit priest.

Corbally is vice director of the Vatican Observatory Research Group, which has its observatory in Mount Graham, Arizona.  The goal of the Research Group is to combat head on the belief that Catholicism and science necessarily conflict.  How?  By doing serious astronomical studies with the full sponsorship of the Catholic Church.

Corbally is joined in his work by fellow astronomer and Catholic Aileen O’Donoghue, author of “The Sky Is Not a Ceiling: An Astronomer’s Faith.”  O’Donoghue, who by her own admission had lost her faith, says she rediscovered God “in the vastness, the weirdness, the abundance, the seeming nonsensicalness, and even the violence of this incredible universe.”

Besides the backing of the Catholic Church, however, the staff and observatory in Mount Graham does not differ at all from any other astronomical research team.  Currently, the research topics for the VORG include dark matter, quasars, and the acceleration of the universe.  In fact, their telescopes recently discovered a new supernova in the spiral galaxy
CGCG 223-029.

To read more about the Vatican Observatory Research Group, as well as other ways the Catholic Church is seeking to promote harmony between science and religion, be sure to read “Vatican’s Celestial Eye, Seeking Not Angels but Data” by George Johnson in the New York Times.