What is the most fascinating question in all of science?

My vote goes to the meaning of the so-called “anthropic principle,” and, judging from the traffic to www.biologos.org,
the apparent design of the universe intrigues a lot of people. The
“anthropic principle” derives from a profound recognition on the part
of science in the past few decades that our universe does not appear to
have been an accident but rather fine-tuned for life. But what exactly
does “fine-tuned” mean?

As science developed in the past few centuries, a most astonishing
insight emerged: Everything going on in the universe — from the swirl
of thoughts in your head to the chirping of the bird outside your
window to the exploding of a distant star in some far-off galaxy — is
empowered by just four different interactions: the familiar forces of
gravity and electricity, including magnetism, and two nuclear forces,
one responsible for the fusion reactions in stars like our sun and one
that causes radioactivity.

Physicists
have studied these four interactions extensively, and they are now well
understood. The particular strength of each interaction is perhaps
their most interesting feature. You have probably played with magnets
and noticed that the magnetic force is much stronger than gravity,
which certainly cannot pull apart magnets that are stuck together. In
the formulas for these interactions, a number called a “constant of
nature” specifies their strength. If you increase the value of this
constant, the interaction — or force –grows larger, and vice versa.

For many years these forces were just numbers, part of the physicists’
boring formulas. But in the past few decades all this has changed.
Computer modeling makes it possible to see how the values of these
numbers affect the structure of the universe, from the formation of
galaxies to the structure of DNA.

Consider the strength of gravity. When the Big Bang occurred billions
of years ago, the matter in the universe was distributed randomly.
There were no stars, planets or galaxies; there were just atoms
floating around in the dark void of space. As the universe expanded
outward from the Big Bang, gravity pulled ever so gently on the atoms,
gathering them into clumps that eventually became stars and galaxies.
But gravity had to have just the right force. If the force had been a
bit stronger, it would have pulled all the atoms together into one big
ball, and the Big Bang — and our prospects for life — would have ended
quickly in a Big Crunch. If gravity was a bit weaker, the expanding
universe would have distributed the atoms so widely they would never
have been gathered into stars and galaxies. The strength of gravity has
to be exactly right to get stars to form. But what do we mean by
“exactly”?

It turns out that if we change gravity by even a tiny fraction of a
percent — enough that would make you 1 billionth of a gram heavier or
lighter — the universe changes so much that stars, galaxies and planets
do not exist. And, of course, without planets there would be no life.

The
other constants of nature possess this same feature. Change any of them
and the universe — like Robert Frost’s traveler — moves along a very
different path. Remarkably, every one of these different paths leads to
a universe without life in it. Our universe is friendly to life but
only because the last 15 billion years have unfolded in a particular
way that led to a habitable planet with liquid water and rich
chemistry.

People who have reflected on this have many different reactions. Some
speculate there must be an infinity of different universes with every
imaginable combination of properties; we just lucked out to be in a
universe capable of having people in it. My favorite response to the
fine-tuning of the universe, though, is that of Freeman Dyson, former
physics professor at the Institute for Advanced Study at Princeton
University and one of the most brilliant and interesting
astrophysicists living today. “The more I examine the universe and the
details of its architecture, the more evidence I find that the universe
in some sense must have known we were coming,”writes Dyson in his 1979
autobiography, Disturbing
the Universe.

I asked Dyson if 30 years later, he still feels the same way about his oft-quoted phrase.

“Yes,” he said, “though I hate the word `anthropic’ because that refers exclusively to humans.” The Greek anthropos means a man or a human. “What it says is that the universe has to be built in such a way that intelligent creatures can ask questions about
it. It doesn’t mean the universe was designed for humans. That’s not
what I intended to say. What it means is that the universe seems to be
constructed in a way that it is hospitable to life and intelligence. I
still think that’s true.”

(The full text of this interview
is available at www.biologos.org)

The fine-tuning of the universe is a perfect example of the BioLogos
perspective: God is working continually within, through and behind the
unfolding patterns of nature to bring about God’s intentions and
purposes. Such a claim goes beyond science. Even Dyson, with
characteristic modesty, is reluctant to claim too much. But reality is
more than just science, and as Christians, we can celebrate in worship
the marvelous character of the world that science has unfolded for us. 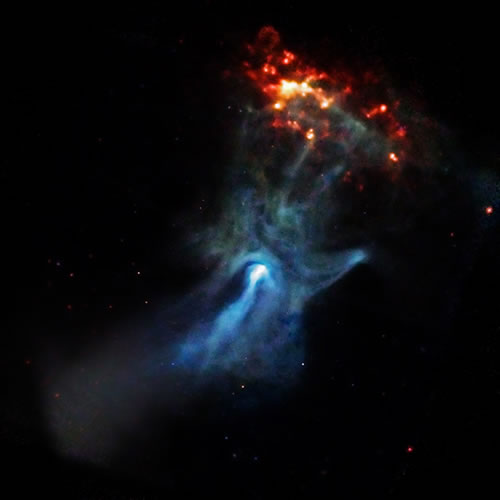