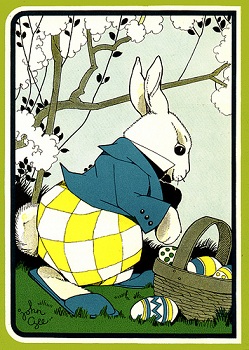 My granddaughter Sara is six years old. About six months ago, her mom called to
tell me Sara wanted to talk about some theological concepts. She put Sara on
the phone, and I was peppered with questions like, “Who made God?” and “Where
is heaven?” Our discussion led her to pose more questions about the details of
what happened when Jesus was resurrected and ascended into heaven. I could tell
she was a little skeptical about all of this but seemed willing to believe me
because I am her grandfather. As I continued the phone conversation with her
mother, Sara called out in the background, “Tell Grampy I don’t believe in the
Easter Bunny.” I smiled at the thought that I had been granted the resurrection
and ascension, but the Easter Bunny had to go.

A couple of months after our conversation, Sara lost a tooth. In her growing
skepticism of all things childish, she sat down, pen in hand, and wrote a note
to the one who normally rewards her for each tooth left under her pillow. “Dear
Tooth Fairy,” she wrote, “Please don’t leave me any money this time, just leave
me a Mary Kate and Ashley DVD, and also would you leave a picture of yourself?”
I think she had grown suspicious that her mother was the tooth fairy and
figured out this sly way of still drawing on the benefits — and maybe even
increasing them a little — while satisfying her instinctive desire to get at
the truth. Letting go of her belief in Santa won’t be far behind, but that will
be a little tougher to give up. After all, Christmas presents are considerably better
than Easter eggs scattered around the back yard or a one dollar bill found
under her pillow.

As we grow up, we let go of the myths of our childhood. And many people believe if
we really grow up, we’ll let go of the myth of a creator — especially the highly specific logos of John 1: “In the beginning was the Word and the Word was with God and the Word was God.” Surely we ought to be able to let go of that myth by the time we are in middle school. Surely science — which has never been able to detect a creator and is getting increasingly successful at explaining much of biology without a need to invoke God — has made such a view highly antiquated. Why, 150 years after Darwin, do so many adults still believe in the bodily resurrection of a dead person and a God who can hear individual prayers of hundreds of millions of people at once? If my granddaughter can see the parallel between these religious convictions
and her former belief in the Easter Bunny at the age of six, why can’t those of
us who have been around many times longer see the parallel, proceed to reject
it, and then move on? Are we, like Sara with the tooth fairy, just playing
along? Have we been unwilling to relinquish this one last antiquated belief
because the personal cost is too high?

It is very clear that evolution has occurred. It is also abundantly clear that
natural selection and other natural phenomena have worked as the driving force
behind life’s amazing diversity (watch this space for more details in coming
days). However, despite the reality of evolution, there is information that leads us to believe in a reality that extends beyond what we can study through science. There are
data, for example, that imply that key elements in the story of Jesus’ life really did take place. If so, a scientist ought not to reject that data without careful examination.

Much of the data that informs the science of evolutionary biology is historical in
nature. As a science professor, when I read a book written by The University of
Edinburgh biblical scholar Larry Hurtado that explores in detective-like fashion how soon early Christians began to venerate Jesus of Nazareth, I follow the same logic I use when reading evolutionary biology papers. Although the facts may not be as clear cut as those emerging from some of the experiments I’ve discussed with thousands of students over the years, Christian belief is nevertheless grounded in real data.

To explain the rational base for Christianity Timothy Keller, author of “The Reason for God: Belief in an Age of Skepticism,” examines the data the same way I want my students to do as they think about the ramifications of the data that emerge from studying the history and diversity of life forms. When I read the work of theologians like Dietrich Bonhoeffer, a 20th century German Lutheran pastor who wrote about the theological ramifications of Genesis 1-3, or Karl Barth’s“The Doctrine of Creation,” I consider it as brilliant as the work of my scientific heroes including molecular biologists Seymour Benzer, Francis Crick and Sydney Brenner. Barth, Bonhoeffer, Keller and Hurtado all base their work on profoundly significant data also.

For graduate students, the unforgiveable sin is to discuss a particular concept as being the only acceptable one when there are other reasonably logical possibilities to explain the same thing. There are some very good reasons to think the God of Christian theology really does exist. Not only has this concept not been falsified, but also there is much data to support its veracity. Those who doubt these beliefs should ask themselves what they have actually done to test that doubt. For example, when reading the
epistle to the Romans, have they sincerely tried to picture how someone could
fake a document almost certainly written within 25 years after the death of the
historical person named Jesus? Could something so packed with sincere emotion
and veneration really have been faked? Have those same people read Keller’s book with the open mindset that is supposed to be the trademark of any scientist?

The concept of the God of Christian theology simply does not fall into the same
category as an easily falsified hypothesis about the existence of the Easter
Bunny, the tooth fairy or Santa Claus. There are data similar to that which
detectives and historians use to reach conclusions about what is likely and not
so likely. It may not be scientifically testable the way the replication mechanism of DNA is testable or in a manner that parallels the experiments supporting the theory of evolution, but there are good, rational reasons that serve as the foundation for a life of faith.

Sara’s next hurdle is going to be Santa Claus, and whether she will admit it or not, I
predict she’ll move that aside within the next year or two. However, the belief
that there may be something more to this universe than what science alone
reveals will not fall so easily — not if she is as smart as I think she is.

Darrel Falk is a professor and chair of the biology department at Point Loma Nazarene University in San Diego and executive director of The BioLogos Foundation.