When I opened up my morning New York Times and saw a giant, above-the-fold story on how Cardinal Ratzinger’s office had the authority all along to deal with the sex-abuse crisis, and not just since the early part of the last decade, my first thought was: they must have some sort of big, bad smoking gun to merit this kind of play.
I read through all 4,000 words of the thing, and … there’s not that much to it. The real gist of the story is how the incredibly tangled legal culture of the Vatican and its sprawling bureaucracy tended to keep the right hand from knowing what the left hand was doing, and contributed to impeding reform and swift action against clerical abusers. This is the heart of the real story:

Nicholas P. Cafardi, a Catholic expert in canon law who is dean emeritus and professor of law at Duquesne University School of Law, said, “When it came to handling child sexual abuse by priests, our legal system fell apart.”
There was additional confusion over the statute of limitations for sexual abuse cases — or whether there even was one, given the Vatican’s reaffirmation of the 1922 and 1962 papal instructions. Many bishops had believed that they could not prosecute cases against priests because they exceeded the five-year statute of limitations enacted in 1983, effectively shielding many molesters since victims of child abuse rarely came forward until they were well into adulthood.
Mr. Cafardi, who is also the author of “Before Dallas: The U.S. Bishops’ Response to Clergy Sexual Abuse of Children,” argued that another effect of the 2001 apostolic letter was to impose a 10-year statute of limitations on pedophilia cases where, under a careful reading of canon law, none had previously applied.
“When you think how much pain could’ve been prevented, if we only had a clear understanding of our own law,” he said. “It really is a terrible irony. This did not have to happen.”

Understand, it’s not that Cardinal Ratzinger, now Pope Benedict, is blameless here. It’s rather that what the Times has found is an example of how a moral imperative — dealing firmly and effectively with the problem of child-molesting priests — got obscured and smothered by the fog of bureaucracy. That’s an important story, indeed a tragic one. But it’s not the story the Times apparently wants the reader to take away from its reporting, as evidenced by this astonishing passage of editorializing within the story itself:

During this period, the three dozen staff members working for Cardinal Ratzinger at the Congregation for the Doctrine of the Faith were busy pursuing other problems. These included examining supernatural phenomena, like apparitions of the Virgin Mary, so that hoaxes did not “corrupt the faith,” according to the Rev. Brian Mulcahy, a former member of the staff. Other sections weighed requests by divorced Catholics to remarry and vetted the applications of former priests who wanted to be reinstated.
The heart of the office, though, was its doctrinal section. Cardinal Ratzinger, a German theologian appointed prefect of the congregation in 1981, aimed his renowned intellectual firepower at what he saw as “a fundamental threat to the faith of the church” — the liberation theology movement sweeping across Latin America.
As Father Gauthé was being prosecuted in Louisiana, Cardinal Ratzinger was publicly disciplining priests in Brazil and Peru for preaching that the church should work to empower the poor and oppressed, which the cardinal saw as a Marxist-inspired distortion of church doctrine. Later, he also reined in a Dutch theologian who thought lay people should be able to perform priestly functions, and an American who taught that Catholics could dissent from church teachings about abortion, birth control, divorce and homosexuality.

This is incredibly unfair, even tendentious, designed to lead the reader to the conclusion that Ratzinger busied himself being “God’s Rottweiler,” as his enemies have called him, attacking favorite causes of liberals, while letting abused children hang. My longtime readers know that I have not hesitated to criticize Benedict over his handling of the scandal, when I thought that criticism was warranted. It’s hard for me to conclude, though, that this massive Times story today is meant as much more than an unfair, and ideologically-driven, attack on the Pope.
Let me say it again: I do not think this Pope has done nearly enough to fix the problems within the church related to the scandal, though he has done far more than his predecessor. I think he is handling the matter fairly poorly, and only looks good by comparison to previous popes, including John Paul II. For all that, it’s hard for me to avoid the conclusion that the Times took the nugget of a good story — how the Vatican’s bureaucracy and otherwordly mindset worked to prevent urgent and necessary action on behalf of abuse victims — and tried to turn it into a millstone to hang around Benedict’s neck. This is very poor journalism. I leave it to Mollie Hemingway at Get Religion to take you through the particulars. Her conclusion:

It just reads like a hit piece and I’m truly disappointed in it. And not just because I so admire [reporter Laurie] Goodstein’s body of work. A piece of this length with that kind of absolutely inflammatory lede better back it up well. It doesn’t even come close. In no way did the story live up to its big-talking promises at the beginning. And that’s because the reporting didn’t support those claims.
This could have been an illuminating story about how dysfunctional the Vatican is or how confusing it can be when you have competing statutes in canon law. All of that is newsworthy and valid. There are plenty of Catholic scandals to report on. And the desire to advance the story by connecting it to the Vatican is fine, even if the complete lack of context in these stories is unfortunate. But no matter how much you want to have a hot story, you can’t let accurate reporting become a casualty.

UPDATE: Michael Sean Winters at the (liberal) National Catholic Reporter, which has been highly critical of the bishops and the Vatican for its handling of the sex abuse crisis, lays into the Times report hard. Excerpt:

This morning’s New York Times “expose” regarding then-Cardinal Ratzinger’s role in the Vatican’s response to the clergy sex abuse crisis exposes more than it intended. It exposes the fact that the authors, Laurie Goodstein and David Halbfinger, and their editors, do not understand what they are talking about and, at times, put forward such an unrelentingly tendentious report, it is difficult to attribute it to anything less than animus.
The article put me in mind of Lady Bracknell in Oscar Wilde’s The Importance of Being Earnest. “To lose one parent, Mr Worthing, may be regarded as a misfortune; to lose both looks like carelessness.” One or two mistakes are to be expected. The friend I consult on environmental matters tells me that when she reads the Times on the subject, she assumes they will get it wrong. But a slew of such mistakes raises doubts. Ignorance is a scarcely less heinous crime for a reporter than bias. You be the judge. 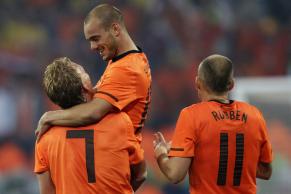