The incredible story of Quanah Parker

I listened over the weekend to a Fresh Air podcast interview with S.C. “Sam” Gwynne, a talented Texas writer who has just published a book that I’ve got to find time to read: “Empire of the Summer Moon.” (The New York Times recently published an excerpt). Gwynne’s book is a history of Quanah Parker (ca. 1852-1911), the last chief of the Comanches, described by Gwynne as the greatest of American Indian tribes. Parker’s mother, Cynthia Ann, was kidnapped at age 9 by a Comanche raiding party on the Texas frontier, and raised by the tribe as a Comanche. She bore Quanah by her husband, a Comanche chief named Peta Nocona. Cynthia was later recaptured by whites, and returned to the Parker family — but she often tried to escape to make her way back to the Comanches, which she regarded as her people. She died early, tormented by her loss.The amazing, and deeply American, story of this mother and her son is full of heartbreak and tragedy. If “Empire of the Summer Moon” hasn’t been bought by Hollywood for a feature film, somebody in California is not doing his job. 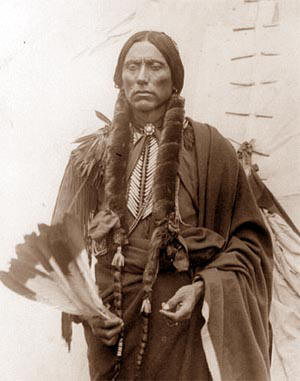 Anyway, in the Fresh Air interview with Sam Gwynne, I was particularly struck by this part of Terry Gross’s conversation with him, in which Gwynne discussed the intense savagery of the Comanches, and how in recent years we’ve tended to romanticize and soft-pedal the cruelty of Native American tribes. Excerpt from the transcript:

GROSS: You describe very vividly what the raid, what the Comanche raid on the Parker fort was like, and it’s gruesome.
Mr. GWYNNE: Extremely.
GROSS: So I’m going to ask you to describe it, but first I’ll say if you don’t want to hear a gruesome description, this is your opportunity to tune out for maybe two minutes. Come right back.
(Soundbite of laughter)
GROSS: But, I mean, this is history. So – and I think it’s very important and interesting history. So please describe what happened.
Mr. GWYNNE: Well, what happened was what happened in every plains Indian raid going back for centuries. In other words, it was – this is what Indians did to Indians, and this just happened to be Indians meeting whites.

But the automatic thing in battle is that all the adult males would be killed. That was automatic. That’s one of the reasons that Indians fought to the death. The white men were astonished at it, but they were assuming – assumed that they would be killed.
The most – the small children were killed, very small children were killed. A lot of the, say, children in the, I don’t know, three-to-seven or three-to-10 range were often taken as captives. The women were often raped and often killed. And so it was an extremely brutal – and it was when – all of the people in the settlements back in those years knew what it was, knew what a Comanche raid meant, which was the same as a Kiowa raid or an Arapaho raid or another kind of raid.
But they were grim. They were grisly. Captives were usually involved, you know. and it’s an interesting kind of moral question that you have to – as an historian about plains Indians or about American Indians in general, you have to come to terms with this, with torture, which they did – which they practiced all across the West and, in fact, all across the East – and these kind of grisly practices that scared white people to death.
GROSS: I mean, you’re talking not only about scalping. You’re talking about various forms of mutilation, cutting off fingers and toes, gang…
Mr. GWYNNE: Torture by fire, torture by all sorts of different things – I mean, putting, you know, hot coals on your stomach. I mean, there were lots and lots of imaginative tortures that were, indeed, practiced by Indians all across the Americas.
GROSS: And this includes gang rape.
Mr. GWYNNE: It includes gang rape.
GROSS: And what I find provocative about this right now is that in American’s attempt to reconcile the atrocities that Americans committed against Native Americans, a lot of the Indian story was maybe rewritten a little bit to leave out some of those atrocities.
Mr. GWYNNE: Oh, I think absolutely.
GROSS: I mean, after focusing so much on, like…
Mr. GWYNNE: Yes.
GROSS: …you know, cowboys versus Indians in Western movies, I think so many Americans felt bad about that kind of, like, good-guy-versus-bad-guy description when white Americans were responsible for so much bad stuff themselves, that maybe – are you suggesting in your book that history maybe got rewritten a little too much in terms of leaving out some of the atrocities that Native Americans did commit in those wars?
Mr. GWYNNE: Oh, I think so. I think that’s a good point. And there was even an attempt at some point to deny that Indians were warlike. They were – Comanches were incredibly warlike.
They swept everyone off the Southern plains. They nearly exterminated the Apaches. They were warlike by nature. And, you know, if you look at, say, the Comanches, and then you look back in history at, for example, you know, Goths and Vikings or Mongols or Celts – or old Celts are actually a very good parallel.
In a lot of ways, I think we’re looking back at earlier versions of ourselves. It was we – we, being white Europeans – did all of those things. Not only that, but torture was institutionalized in things like the Counterreformation and the Spanish Inquisition. It was part of, you know, the Russian empire. I mean, torture is not the exclusive province of the Indians.
But I think you’re right. I think there was a certain wave of books, a certain type of book that wanted to kind of set the record straight in a different way. But yes, it was – life was extremely brutal, and it was extremely brutal on both sides. And in my book, I don’t – I try not to take sides. The whites were perpetrators of some of the most astonishing massacres in history, but so were the Indians.

Human nature does not change. I really, really want to read this book. If a film is made of it, I hope that Hollywood can avoid the Cameronization of the Comanches, and instead tell the story in all its human complexity.