Right now, the oil spill focus is on the junk moving through Louisiana’s marshes and estuaries, and on the gut-wrenching images of oil-soaked pelicans struggling to survive. But it’s worth thinking about how the BP oil spill is going to affect Louisiana in the months and years ahead (and other Gulf states too, but primarily Louisiana).
My Louisiana family has friends and neighbors with condos and camps along the Gulf coast, in Grand Isle, in Alabama, and on the Florida panhandle. All those properties are now worth far less than they otherwise would be, and possibly worthless. One family we know had their Florida condo rented out for the summer; the tenants cancelled, and why not? Who wants to spend summer on an oily beach? Another family put its Grand Isle camp on the market two weeks before the oil spill. Who would buy that camp now? None of the folks I’m talking about here are remotely rich, but now the beach properties they own have endured something like a dirty bomb going off nearby: they are still standing, but more or less uninhabitable, in that they were built to be inhabited by vacationers enjoying the beaches and fishing.

Think about the hundreds of thousands, even millions, of people all along the Gulf coast who depend on beachgoers for their livelihoods. What kind of summer do you think coastal communities are going to have now? On Thursday, an oil sheen hovered four miles off Pensacola Beach, where tar balls are already washing up. Oil is also washing up on Gulf Shores, AL, beaches, and has been found in Mobile Bay. The ultimate cost to those towns and cities from a summer of empty beaches is horrifying to contemplate. A report from today:

In Gulf Shores, Ala., boardwalks leading to hotels were tattooed with oil from beachgoers’ feet. A slick hundreds of yards long washed ashore at a state park, coating the white sand with a thick, red stew. Cleanup workers rushed to contain it in bags, but more washed in before they could remove the first wave of debris.
The oil is showing up right at the beginning of the lucrative tourist season, and beachgoers taking to the region’s beaches haven’t been able to escape it.
“This makes me sick,” said Rebecca Thomasson of Knoxville, Tenn., her legs and feet smeared with brown streaks of crude. “We were over in Florida earlier and it was bad there, but it was nothing like this.”
At Pensacola Beach, Erin Tamber, who moved to the area from New Orleans after surviving Hurricane Katrina in New Orleans, inspected a beach stained orange by the retreating tide.
“I feel like I’ve gone from owning a piece of paradise to owning a toxic waste dump,” she said.

But it is Louisiana that will be the most severely hit by this thing.

State lawmakers, including the governor, are in the awkward position of having to ask President Obama to rescind his six-month moratorium on deepwater offshore drilling, saying that it stands to cost Louisiana 20,000 jobs. Today’s NYTimes carried a report on how painful an economic hit Louisiana stands to take from this moratorium. I have no idea what the loss in tax revenue to the state stands to be — I don’t think the state can legally tax those deepwater rigs — but given how dependent Louisiana government is on the oil and gas industry to fund state programs, it’s got to be significant.
Much has been said about the state’s commercial fishing industry, and how it’s being devastated by this spill. Did you know 25 percent of America’s seafood comes from Louisiana waters? About 16,000 Louisianians work in the seafood industry, which is worth an estimated $2.5 billion in annual revenue. What are they going to do for work? Whole towns in coastal Louisiana depend on fishing and shrimping economically and culturally. What are they going to do? Over 100,000 restaurant workers in south Louisiana will be affected, as will those who depend on sportfishing. Luckily, 70 percent of Louisiana’s seafood comes from west of the Mississippi river, which for now is free of oil. Still, with the job losses mounting, a state government whose revenue source will have been seriously compromised will have to somehow provide for masses of people who have no livelihood, and no prospect of it coming back soon.

What’s it look like in Baton Rouge, at the state capital? Just before the April 20 disaster, lawmakers learned that the state’s budget crisis exceeded their worst fears, and that they were going to have to make deep cuts in health care and in higher education. And now legislators have to figure out how to deal with all this amid a crisis that will hurt the state’s economy in ways that cannot yet be fully known, but which will almost certainly be substantial.
And the long term outlook? Even once the surface oil is cleaned up — a process that cannot hope to get all the oil — its effects will remain with the region for years. Nobody knows for sure what the effects will be on the life cycle of the fish, crabs, oysters, shrimp and other wildlife in the reason. Will they be toxic for years to come? Even if people can eat Louisiana seafood, will anybody want to? When will people start to return to Gulf coast beaches? These habits, once broken, aren’t easily restored. My folks said to me on the phone this morning that they fear a long exodus of people from Louisiana as the economy reels from these blows. This is not just an economy in trouble; it’s an entire culture.
And that hole in the ocean is still vomiting oil, with no end in sight. 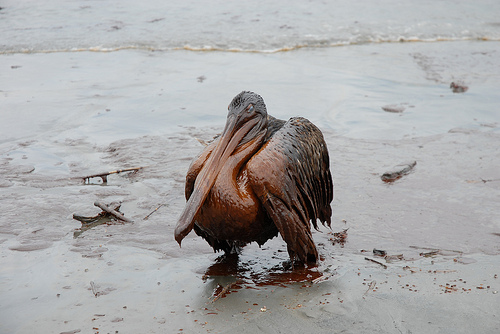 Sad over pelicans? You 'high-class prissy-a*s' aesthete!
archives most recent
More from Beliefnet and our partners
previous posts