Where is the oil spill going? 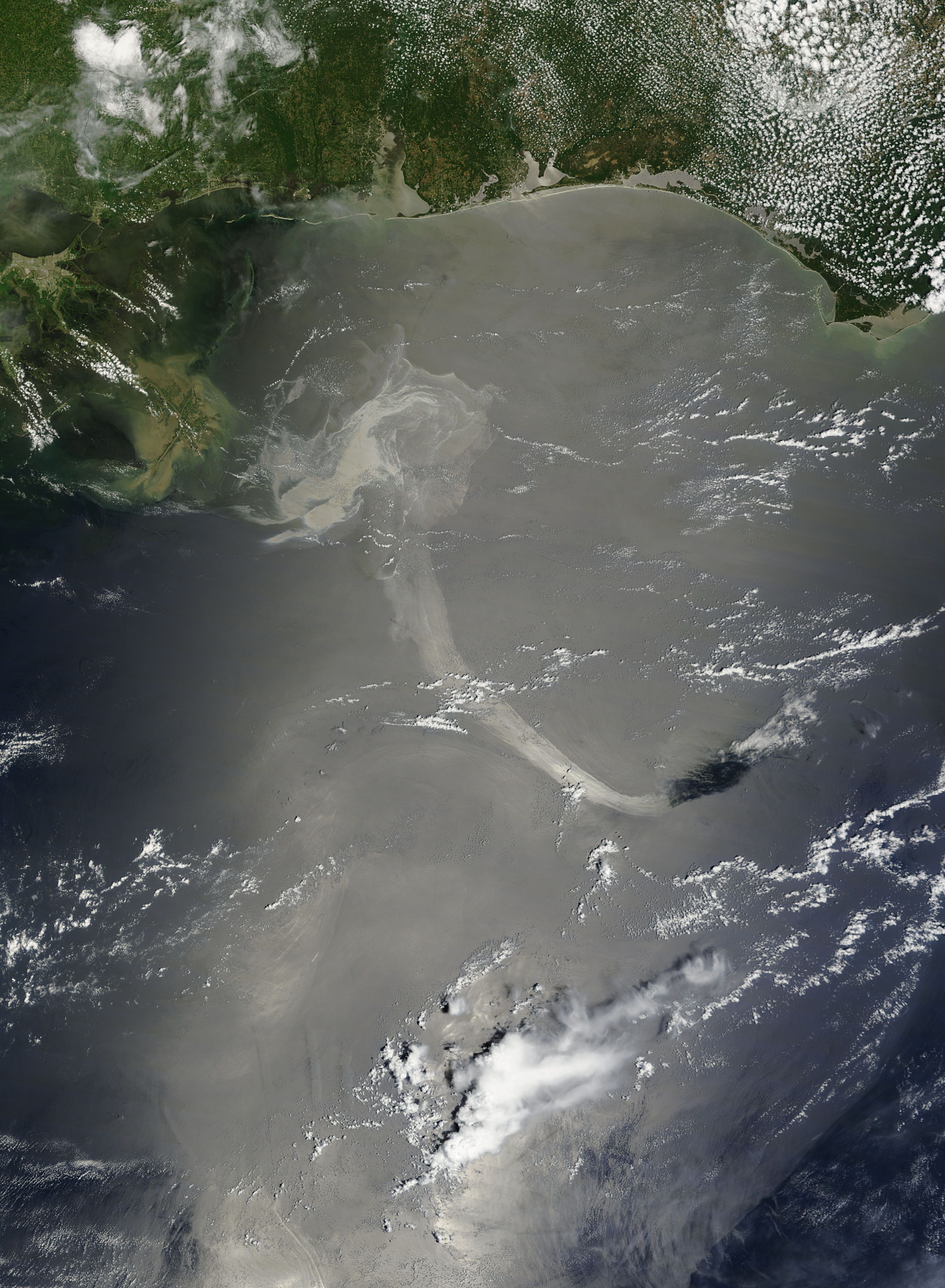 To the left, a May 17 NASA photo of the oil slick, e-mailed by a reader (thanks Randy). I have been wondering why we haven’t seen beaches and marshes along the Gulf Coast inundated with oil. Didn’t you expect that too, when this thing first happened? Apparently it’s how Gulf currents work. Alarmingly, the photo image showing the long tendril of oil streaming southward indicates that the oil slick is coming very close to entering the Loop Current, which could send the oil straight to Florida and up the East Coast. But Gulf coast residents shouldn’t relax; experts say that given the massive amount of oil involved here, landfall in their region is inevitable. Meanwhile, consider this information from an Associated Press report:

And marine scientists are worried even more of the deep-sea reefs could be damaged as the thick goo creeps into two powerful Gulf currents. The oil has seeped into areas that are essential to underwater life, and the reefs tend to be an indicator for sea health: when creatures in the reefs thrive, so do other marine life.
The loop current could carry oil from the spill east and spread it about 450 miles to the Florida Keys, while the Louisiana coastal current could move the oil as far west as central Texas.
The depth of the gushing leaks and the use of more than 560,000 gallons of chemicals to disperse the oil, including unprecedented injections deep in the sea, have helped keep the crude beneath the sea surface. Marine scientists say diffusing and sinking the oil helps protect the surface species and the Gulf Coast shoreline but increases the chance of harming deep-sea reefs.
“At first we had a lot of concern about surface animals like turtles, whales and dolphins,” said Paul Montagna, a marine biologist at Texas A&M University Corpus Christi who studies Gulf reefs. “Now we’re concerned about everything.”

Do we have any freaking idea how bad this is going to be? Bueller? Bueller?
UPDATE: Read this interview with the head of British Petroleum. Very revealing, especially this bit:

So BP passed your tests. The organization has shown you that that the changes you have put into place were successful?
I would say successful in terms of the capability of the response. I don’t hear anyone faulting us on our response. We’d like to get the lynch off (laughing), but you know the intensity of the response is enormous. We’re going to have Ken Salazar and Steven Chu here again tomorrow to …
To put their boots on your neck?
There’s a bit of public rhetoric, what’s actually happening in real life is something different.

So far, this information operations is working. The lower estimates have successfully beaten the media cycle. In the first week of the crisis, most news analysis of the spill downplayed its importance due to lowball estimates. As a result of this news analysis, coverage of the crisis has dropped and the continual denial of information required for analysis has prevented any resurgence of coverage. From the perspective of the government and BP, this information operation has achieved its objectives: it has drastically limited political damage and criticism of previous decisions, which is in stark contrast to the damage generate by the media coverage of Katrina.
Of course, this type of behavior is extremely bad over the longer term. Why is it so bad? For an increasing number of people it is yet another example of an approach, reinforced by ongoing global financial disasters, that uses media manipulation and confidence as a substitute for real solutions. It fails to punish bad behavior due to the need for collusion between the government and the offending corporations to construct the information campaign. It fails to construct real solutions since the facts are not known and the number of people able to address the problem is extremely limited. Also, since these people are the same people that caused the crisis, real solutions are avoided to prevent adverse publicity. Most importantly, it is yet another body blow to the government and the global market system as legitimate organizational constructs, since it proves they can’t be trusted.

UPDATE.3: Yves Smith does not mince words (below the jump):

In other words, the only reason for BP NOT to want to have this information is that:
1. Its remediation efforts to date have some reasonable odds of success only if the outflow is not that much above its 5000 barrel a day estimate
2. Higher outflows and pretty much zilch odds of success of current public-placating dorking around would lead to much greater pressure to Do Something Now.
3. The effective Do Something Now options (like the radical one of using a nuclear weapon to collapse the ocean floor into the leak) would likely also result in making it difficult for BP to ever get oil from that site
4. The BP strategy is thus very likely all about trying to maximize oil extraction by minimizing the appearance of damage and buying time while it drills a relief well
Now let us get to part 2: why is Team Obama enabling this nonsense? I come up with two possibilities:
1. Team Obama believes the BP BS
2. Obama does not want to look impotent. Revealing that the leak is really bad and not having a quick solution is an Obama PR disaster. Obama has to work through BP unless he can implement an action plan using only government resources or by working with another oil company with deep ocean expertise. Given the lead times for government contracting, this would take quite a while.

If the leak is as serious as I fear, this is environmental equivalent of the Iran hostage crisis. Team Obama recognizes this, and therefore wants to create the impression as long as possible that everything that could possibly be done is being done. Note that the Administration is behaving with BP exactly as it did vis as vis the banksters in early 2009: believing that the problem is too complex and scary for them to assert control, casting its lot in with the people who caused the problem in the first place (while calling them bad names often enough to create plausible deniability). And enabling BP’s coverup of how bad the leak means, as Obama did with the financial services industry, of having to support, or at least not undermine too much, its PR efforts.

Strawberries, mud, Champagne and springtime
archives most recent
More from Beliefnet and our partners
previous posts