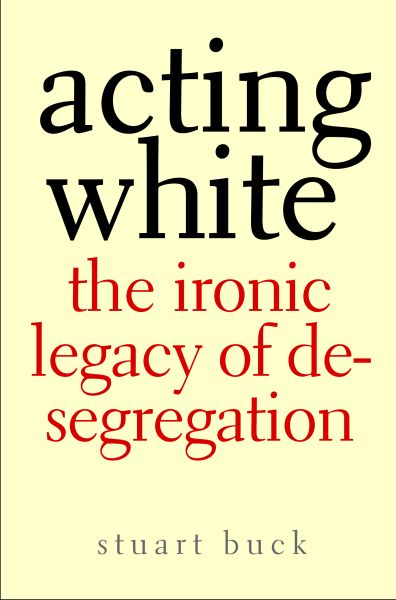 The third and final part of my interview with Stuart Buck, author of “Acting White: The Ironic Legacy of Desegregation” (Yale University Press). Part One is here, and Part Two is here.

In Dallas, where you and I both once lived, Woodrow Wilson High School is a big urban high school that has a large minority population, but also a significant middle-class white population. I once wrote a column focusing on how achievement at Woodrow is a highly segregated affair, with whites doing vastly better on state achievement tests than minorities. I was told by some Hispanic sources that whites heavily populate the advanced placement classes, and that they perceive an official effort to keep minority kids out of these classes. I don’t know whether that’s true or not, but that’s the perception. So it’s formally an integrated school, but segregation within the school is real, and seen by some as problematic. How, if at all, does your study of the “acting white” phenomenon bear on what the state tests results tell us about Woodrow?
As I mentioned earlier, I would expect to see an “acting white” effect in any school that has most students of a minority race in classes perceived as slower and most white students in classes perceived as more advanced. That’s the perfect environment if your goal is to encourage minority students to think that academic achievement is for the other race, not for them.

That said, instituting some sort of quota for minority students in advanced classes isn’t likely to help. Students tend to be smart enough to figure out if they’ve been artificially placed into a class with peers who are more advanced than they are.
What can be done going forward?
I have no magic bullet or panacea to offer here. Changing cultural attitudes is hard work, and one of the main points of my book is that the best-intentioned governmental efforts may affect cultural attitudes in ways that no one anticipated.
Still, I do suggest one idea that I think has some promise: eliminate individual grades, and let students compete against other schools in academic competitions.
This idea is far from original. Rather, it comes from the eminent sociologist James Coleman. Coleman observed the striking fact that while students regularly cheer for their school’s football or basketball team, they will poke fun or jeer at other students who study too hard or who are too eager in class: “the boy who goes all-out scholastically is scorned and rebuked for working too hard; the athlete who fails to go all-out is scorned and rebuked for not giving his all.”
But this is odd, is it not? Why are attitudes toward academics and athletics so different? Sports are more fun than classwork, of course, but that does not explain why success would actually be discouraged in class.
Coleman’s explanation was disarmingly simple: The students on the athletic teams are not competing against other students from their own school. Instead, they are competing against another school. And when they win a game, they bring glory to their fellow students, who get to feel like they too are victors, if only vicariously.
But the students in the same class are competing against each other for grades and for the teacher’s attention. Naturally, that competition gives rise to resentment against other children who are too successful (just as students will hate the football team from a cross-town rival). In Coleman’s words, the scholar’s “victories are purely personal ones, often at the expense of his classmates, who are forced to work harder to keep up with him. Small wonder that his accomplishments gain little reward, and are often met by such ridicule as ‘curve raiser’ or ‘grind,’ terms of disapprobation having no analogues in athletics.”
Indeed, going back to the first study that found the “acting white” criticism, sociologists pointed out that “athletes are exempt from the ‘Uncle Tom’ label because athletic achievement brings credit to the whole group while intellectual achievement does not.”
Coleman’s suggestion, therefore, was that if you want the students’ attitudes towards their studies to resemble their attitudes toward sports, you should minimize the role of grades — which involve competition against one’s classmates. In his words, we need to get rid of the “notion that each student’s achievement must be continually evaluated or ‘graded’ in every subject.” Instead, such grades should be “infrequent or absent,” and should be replaced by “contests and games” between schools, such as “debate teams, music contests, drama contests, science fairs, . . . math tournaments, speaking contests,” etc. Then, the students in any one class or school would have a greater incentive to encourage their fellow students to study hard, and to take pride in their fellow students’ success. In Coleman’s words, “I suspect that the impact upon student motivation would be remarkably great — an impact due to the fact that the informal social rewards from community and fellow-students would reinforce rather than conflict with achievement.”
As I pointed out in my first question, you are very careful to say, over and over again, that segregation was evil and had to end. Knowing what we now know about what happened in desegregation’s aftermath, what would have been a wiser approach to ending segregation?
This is a tough one. My number one suggestion would be that more black schools should have remained open and more white students assigned to those schools. That said, I realize that in the 1950s and 1960s, trying to send white students to black schools would have meant even more social upheaval and white flight. There’s only so much you can do to force people to be good.
Finally, as the adoptive father of two black children, how has your research for this book affected the way you and your wife will raise your children, particularly with respect to their schooling?
I want all my children to feel in the bottom of their hearts that they are intellectually curious and that they love learning and reading, no matter what other children may do or say. I want them to be immune (as far as possible) to peer pressure, which can drag kids down not just in school but in everything else about life.

read next post
American Jews less Jewish? Does it matter?
archives most recent
More from Beliefnet and our partners
previous posts