The impermanence of things

UPDATE: My cousin Kevin just e-mailed an old photo of the cabin I talk about in this post, and one of Aunt Lois doing the dishes in her kitchen in the cabin. I’ve posted them below. 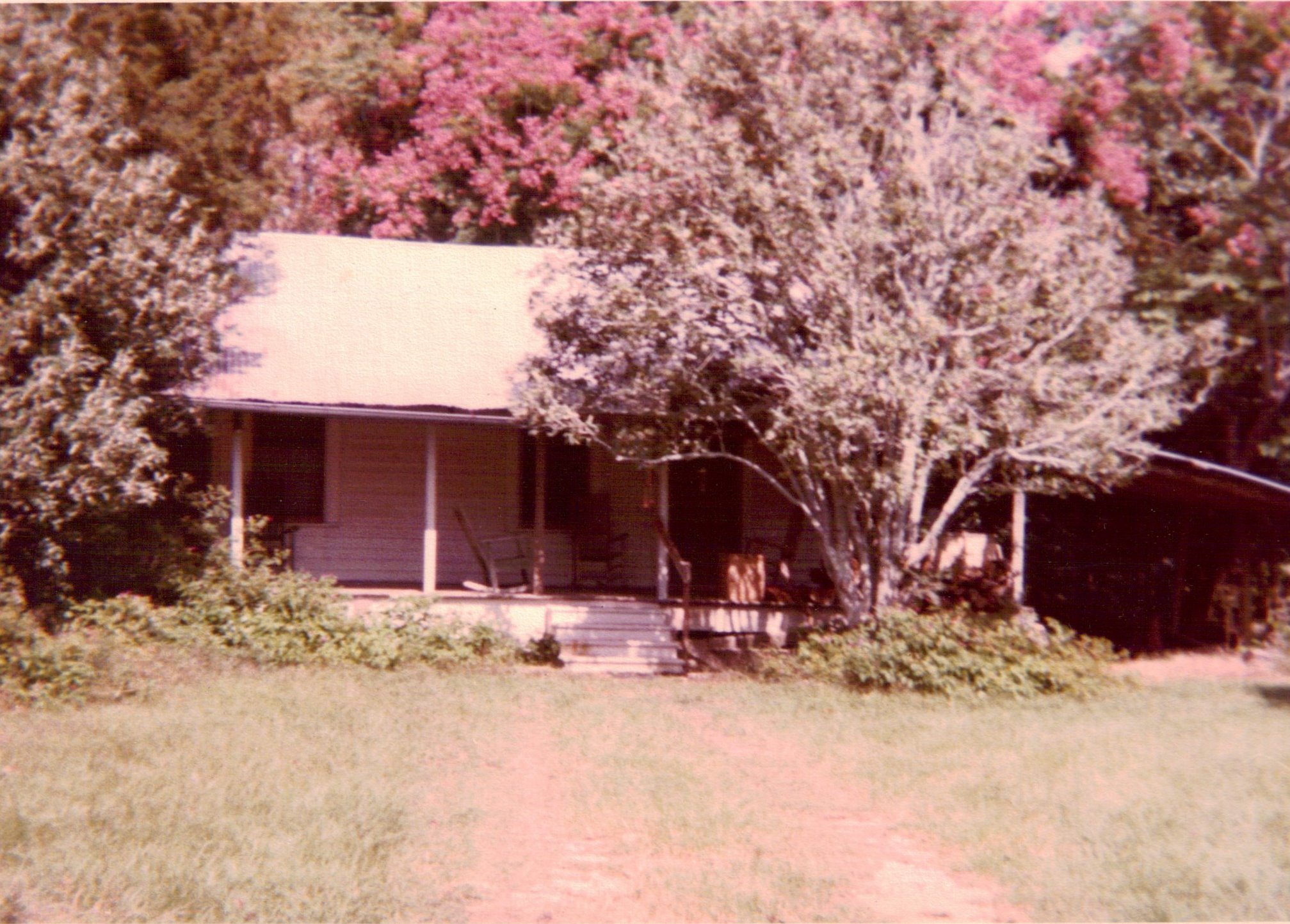 Nearly 20 years ago, I suppose, I came home from wherever I was living at the time for Thanksgiving dinner. After finishing the mid-afternoon meal, I took a walk into an overgrown orchard that had once belonged to my great-great-aunts Lois and Hilda, and which had passed into the hands of a particular branch of the family after the old ladies died. We didn’t have much contact with those members of our extended family, so we don’t know why they allowed the formerly well-tended orchard go to seed, and the frail wooden cabin where Lois and Hilda spent the last years of their lives become a ruin. I hadn’t seen the old cabin since I was a kid, and the old ladies lived there. After they died, I would have been a trespasser had I attempted that.

But on this day, more than a decade after anybody had lived in that cabin, I decided to be a trespasser. I wanted to have a look.
I made my way through what was left of the orchard, but which was now merely an overgrown thicket. Lois had been an accomplished amateur horticulturist, and it stung to see the beautiful japonica and camellia trees she so carefully cultivated now consumed by brambles, briars and overgrowth. The orchard was a ruin, and so by now was the cabin where I spent so many happy days as a very small boy. The front porch of the house was so overgrown by bushes vines I couldn’t reach it, so I climbed in through an open back window. I hadn’t realized how tiny the cabin was — two wee bedrooms downstairs, a bathroom, and upstairs a galley-like kitchen, a small pantry, a sitting room, and a library. The whole thing couldn’t have been more than 650 square feet, but in my imagination, it was much larger. Then again, it would have appeared so to a boy of five.
The cabin was vacant and musty, but it still held the faint aromas I remembered as a boy. Even recalling those memories now, sitting at my desk, I have to fight back tears, simply because those thoughts are so dear to me. Sitting in Loisie’s lap at her worktable in the kitchen, helping her mix pecan cookies, or relaxing on the red-leather couch between the two women, a Rand McNally Atlas spread on my lap, listening to them tell stories of the places they’d been in the world, or bringing in wood from the front porch for them to stoke the fire … all these little things, and many more, added up to a life. I learned to love newspapers listening to Hilda point out mysterious words like “Moscow” and “Kissinger” in the headlines. As I type this, I can remember the quality of light in her bedroom as I sat on her bed staring at a story about Henry Kissinger, trying to figure out why he mattered. I must have been four. Those frail elderly ladies, born on Starhill plantation in the 1890s, and now living out their final years in that shoebox cabin under a rain tree, opened up an imaginative world for young me — one that charted the course for my life. (“You’ll travel far,” Hilda told me one day, reading my palm). It was an enchanted place, that cabin. 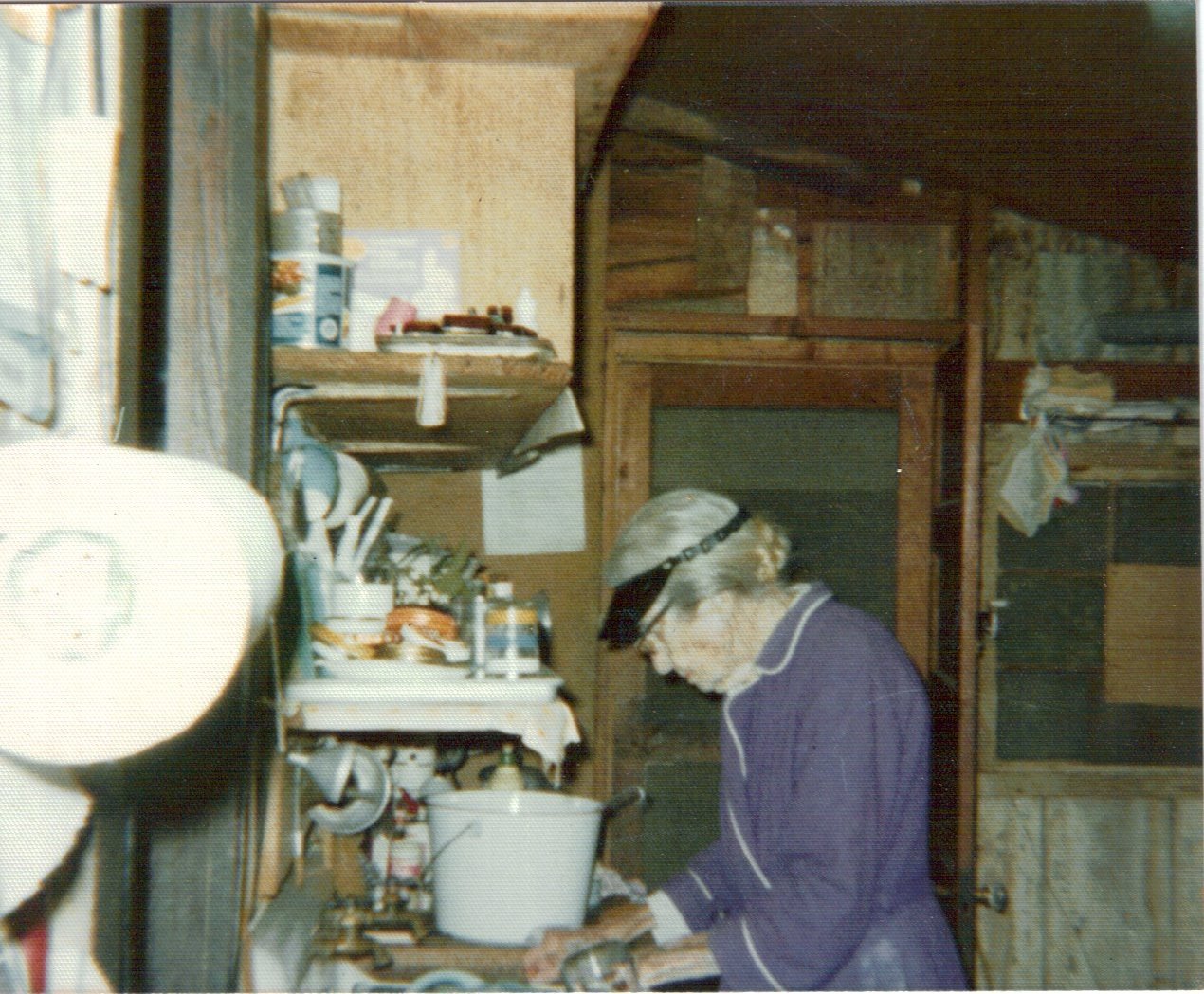 And there, as a grown man, I found myself standing in the dark ruined kitchen, wondering where it all had gone. I saw on the shelf there a single item — Loisie’s pale green Depression glass mixing bowl. I held it in my hands, a totem of my blessed youth there. Something must have unnerved me, because I felt the urge to leave. I took the mixing bowl in hand, went down the back steps, and stood for a last minute in Loisie’s bedroom. It was the size of a monastic cell, and now bare. But look, there is where she kept her Honduran wooden bobblehead of a Carmen Miranda figure, which delighted me as a boy. And when a bed was there, that’s where we laid down late one night when I stayed over and read a Wisconsin cheese catalog, me marveling at the bright blue and red cellophane that looked like Christmas tree balls). Out those French doors is the back porch where I used to feed her cats with her, and where, after she was taken to the hospital in her penultimate illness, an evil cousin came one Sunday afternoon, lured all the cats out with their dinner, and killed them all with shotgun blasts — this, on Hilda’s orders. She was tired of feeding them for her sister. All of us, sitting in the backyard nearby, heard what was going on, and went crazy with grief — but could do nothing.
Lois died not long after that, not knowing what had happened to her cats. After she passed, with me knowing what Hilda had done, I wanted very little to do with the surviving sister. The other side of the family moved her to a nursing home at last — not an unjustified move, I must say — and took control of the cabin and the orchard. And that was the end of that chapter in my life.
I put those thoughts out of my head, climbed back through the bedroom window, slogged through the thicket, and squeezed between the barbed wires of the fence, and was once again in the sunlight. I looked across the yard at my mom and dad’s brick house in the near distance, as the evening began to fall, and I realized that one day, their house would be as Hilda and Lois’s cabin is today: a ruin. I could hear people inside, all our dinner guests, laughing and talking, but that too would fade in time. One day, maybe some grandchild yet unborn, or one of his children, would come in through a back window and search for relics of a barely remembered past, or at least totems testifying that the stories told about this place really had happened. That they weren’t rumors whispered by ghosts. Someday that would happen. But not today.
I put my glass mixing bowl under my arm and walked on to the house.
I thought about this memory this weekend, visiting Ruthie and my family. Ruthie and Mike bought part of what was once the orchard from our distant cousins, and built their house there. The rest of the land that had once been Lois and Hilda’s was sold to strangers. The cabin has long been gone; a nice big brick house belonging to someone I don’t know is now where the cabin was. True to Hilda’s palm-reading prophecy, I traveled far in my life. I have now spent well over half my life living away from there. Yet that is home for me, because that is where my family is, and the landscape of my childhood. Now, though, my parents are getting up in years, and my younger sister, at age 40, is battling a disease that may take her life. I hadn’t realized until this crisis with Ruthie how much I had counted on the continuity of her remaining there, even after our parents pass away, to anchor that place as the center of my imaginative universe. She, who has always loved the land and her place there far more than I, and she, whom I could count on to always be faithful to it, however unfaithful I was, sits in her armchair in what was once the orchard, coughing and straining for breath. We hope and we pray for healing, but now the way I thought the world would be may not be the way the world is, or will become. And I am having a hard time coming to terms with that, as both an emotional and a philosophical matter (i.e., trying to understand how to relate to where I come from now that the permanence I assumed would always be there is threatened).
Nothing lasts. It’s one thing to grasp that intellectually, but to live through the impermanence of things is something else. As usual, Auden got it. Excerpt:

But all the clocks in the city
Began to whirr and chime:
‘O let not Time deceive you,
You cannot conquer Time.
‘In the burrows of the Nightmare
Where Justice naked is,
Time watches from the shadow
And coughs when you would kiss.
‘In headaches and in worry
Vaguely life leaks away,
And Time will have his fancy
To-morrow or to-day.