How did this happen? Who on earth could have seen this coming?:

It turns out a crowded museum, like a crowded subway, is no excuse for an improper touch. This lesson has been learned the hard way by some visitors to “The Artist is Present,” the Marina Abramovic retrospective at the Museum of Modern Art, which features performers re-enacting performance pieces by Ms. Abramovic, many in the nude.

“In at least three instances, I have heard people were removed from the gallery for inappropriate touching,” said Gary Lai, one of the performers, who, although he had not been violated himself, said he had been told this by museum guards and fellow performers. “I didn’t think that would happen at all; who’s going to do something with all these people around?”
Ms. Abramovic’s work often involves nudity and sitting, standing or lying down for long periods, and it gives the performers a substantial measure of independence in interacting with people. It has invited close encounters of all kinds at the MoMA show. In addition to blatant gropers, there have been stalkerish types who have tracked performers down on Facebook and an excitable visitor who got so close to a naked performer that she stepped on her toes, causing her to faint soon after. And then there are the commenters, praising or criticizing the performers’ bodies, yelling at them to wake up when their eyes are closed, even helpfully telling the nude performers in “Imponderabilia,” a piece in which two of them face each other across a narrow gallery entrance, that “your fly is down.” As one performer said of the constant crush of people, at some point “you begin to feel like a subway turnstile.”

In other news of the culturally moronic, behold, the world’s most depressing toy! (Thanks for the tip, Erin): 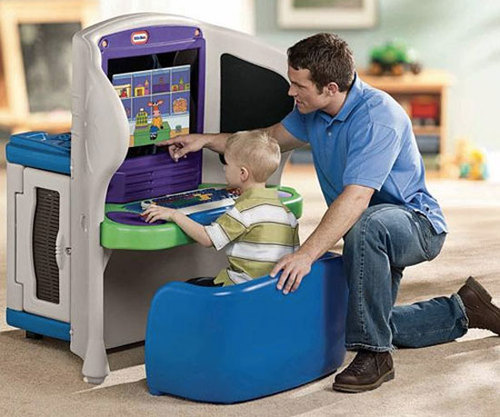 read next post
Talking, but not listening
archives most recent
More from Beliefnet and our partners
previous posts