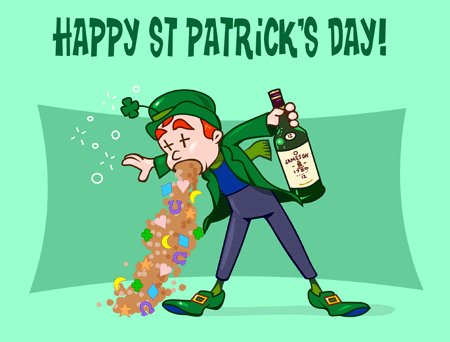 Matthew Schmitz, who’s half-Irish, has a bone to pick with St. Patrick’s Day:

Many white Americans really are Irish, of course, but the reason so many white people of all ethnic backgrounds celebrate this one ethnic holiday rather than, say, Oktoberfest, goes deeper. It would be a little weird, not to say unseemly, for Americans of English or German descent to parade in the street celebrating their ethnic heritage. To do so would be a little like dancing in the end zone of colonial history. And so, because the Irish were actually the subjects of discrimination and oppression, Irishness has become the go-to white ethnicity. … Being half Irish myself, I think there are many good reasons to celebrate St. Patty’s, not least Ireland’s impressive religious and literary heritage. But I think it is weird that one of the reasons the holiday exists is to give the privileged a chance to dress up in the drag of historical oppression.

Well, maybe — but do most Americans out getting sozzled on green beer today really have the slightest idea about what the actual Irish people suffered? I don’t think so. I think most of us have this idea of the Irish as a fun-loving people who love to drink beer, tickle leprechauns, and listen to U2. And that’s about it. Still, I think Schmitz is onto something, if not quite for the reason he offers. It really would be weird to think about an ethnic festival for any of the other major white groups in this country. Can’t do English because of their complicated relationship with the founding of America (we fought them, after all). Germans? Self-explanatory. Scandinavian? No fun! Italian? Well, maybe … but we did fight the Axis in World War II, and besides, Italians don’t speak English, and are a bit removed from the Anglo-Scots-Irish majority of white people in this country. So it’s the Irish by default! And they are a lovely people, if I may say so myself, given the Irish blood in my mongrel German-English-Irish background.
UPDATE: Folks, I know that some cities celebrate Columbus Day as their Italian festival, and others have Oktoberfest, and so forth. But not all do. Having grown up in Louisiana, I was startled when I moved to NYC to see what a big deal Columbus Day is there. I went to my first Oktoberfest when I moved to south Florida in the mid-1990s — but like every Oktoberfest I’ve ever been to, that celebration (usually confined to a particular area) can’t begin to compare to St. Patrick’s Day, which is observed by many, many bars. The only white ethnic holiday that is universally celebrated in this country is St. Patrick’s Day. At least that has been my experience.