“Well,” said my sister to me this morning, “I was diagnosed on Tuesday, and the next day was Ash Wednesday. I guess this is my Lent.”
The people of the Church used to think of Lent as a journey of dying to self, and dying into sanctification. But as the Orthodox Father Alexander Schmemann observes, we’ve fallen into the bad habit of thinking it as a time for following rules of fasting, until such time as we can resume normal life. We therefore refuse the opportunity for spiritual purification and growth given to us by the severe mercy of Lent.
That’s not going to be a problem for our family this Lent.
In his book “Great Lent: Journey to Pascha,” Father Schmemann writes of the importance of the long, solemn Lenten services in shifting us into a time of “bright sadness”: a sorrowful time, yes, but also a time in which the darkness is not absolute, but merely cloaks the light. He writes, of those services:

Little by little, we begin to understand, or rather to feel, that this sadness is indeed “bright,” that a mysterious transformation is about to take place in us. It is as if we were reaching a place to which the noises and the fuss of life, of the street, of all that which usually fills our days and even nights, have no access – a place where they have no power. All that which seemed so tremendously important to us as to fill our mind, that state of anxiety which has virtually become our second nature, disappear somewhere and we begin to feel free, light and happy. It is not the noisy and the superficial happiness which comes and goes twenty times a day and is so fragile and fugitive; it is a deep happiness which comes not from a single and particular reason but from our soul having, in the words of Dostoevsky, touched “another world.” And that which it has touched is made up of light and peace and joy, of an inexpressible trust.

I spent this morning sitting with Ruthie on her front porch in the country, warmed by the sun. The japonicas were in bloom, and a lone paperwhite peered at us from just beyond the rail. We were alone for most of that time, Mike having gone into town to pick up prescriptions, and the girls inside taking showers and such. So: your sister, your one and only sibling, who one week ago was reveling at the Spanish Town Mardi Gras parade, sits beside you on her porch, a scar on her neck, bearing within her still-beautiful body deadly and aggressive cancers. You hope and pray to see her again, but if you do, she won’t look like this; the radiation and the chemo will have tortured her body and cruelly distorted her image. 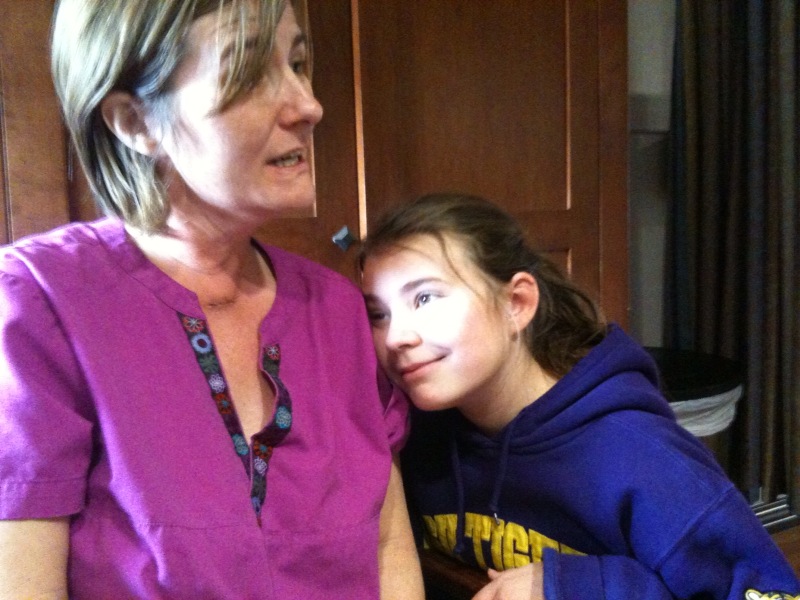