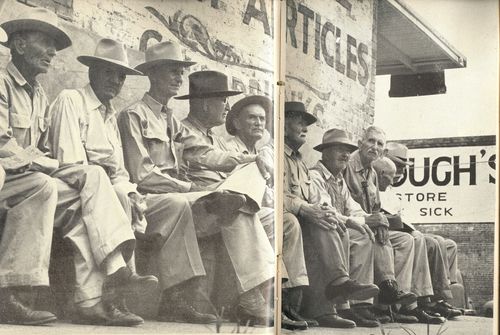 Here’s a discussion of a terrific Life magazine article from 1949, about a failed campaign in the small East Texas town of Whitney, to ban a bench that the town’s old coots sat on and watched the world go by. Excerpt:

It came to the mayor of Whitney, Frank Basham, to appease “a delegation of local housewives” who were fed up with the old men, and wanted the “unsightly bench” gone. It was probably a lot more than the bench, as the quote above by Mrs. T.E. Bagley contends: “Why, they must spit two or three gallons a day! They ain’t died fast enough, these old men!”. Perhaps a dozen old farmers/ranchers/cowboys sitting on a bench all day long spitting and watching the world go by wasn’t the most attractive thing for downtown Whitney.
And so it came to pass that the lumber was removed, but not the men–they returned with nail barrels and took up residence, unabated, “sitting wrathfully” on the kegs. The police then threatened to confiscate the kegs, and then the men: tensions flared, and a special election was held, a referendum on whether or not to restore the bench.

“They ain’t died fast enough.” “Sitting wrathfully.” Love it.
About 20 years ago, we had a bench something like this in St. Francisville, my hometown. My grandfather was one of the old gaffers who sat on it every afternoon. We all called it The Dead Pecker Bench, but never in front of them, of course.
(Via Boing Boing).