So clerical celibacy was not the problem?

Those on the Catholic left are not very happy that the Jay Report declines in no uncertain terms to blame clerical celibacy for the sexual abuse crisis. As the report puts it:

Factors that remained consistent over this time period, such as celibacy, do not explain the sexual abuse “crisis.” Celibacy has been constant in the Catholic Church since the eleventh century and could not account for the rise and subsequent decline in abuse cases from the 1960s through the 1980s.

This is the way social scientists, bless their hearts, look at causation. You’ve got a “factor”; it’s constant through a period of change; therefore it cannot be a cause of the change. Case closed. Q.E.D. 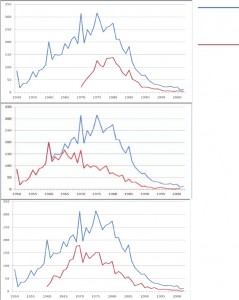 The charts on the right, taken from the Jay Report, show the number of sexual abuse incidents by all priests (blue lines) and by ordination cohort (red lines). There’s the same big run-up in the sixties and seventies, the same peaking around 1980, the same decline afterwards (though steeper in the case of abuse).

Now, one can easily blame the increase in divorce–including, of course, the rise of no-fault divorce laws–on the cultural changes of “the sixties.” Marriage itself was not the problem; something else was responsible for divorce going off the chart. But whatever that something else was, it made marriage as it was somewhat problematic. Lots of married people wanted out, and no doubt a significant portion of them got out in inappropriate (immoral) ways. And by the time divorce rates peaked, marriage as a social institution had itself changed. No longer was there the same stigma attached to living together and bearing children out of wedlock; no longer was there the pressure to get married. For better or worse, marriage has ceased to do as much work in American society as it once did.

So with celibacy in the Catholic Church. In the sixties, it became problematic. Many priests and nuns left the celibate life–and (it seems) a significant number of priests got out of it by behaving badly. And by the time abuse rates peaked, celibacy had come to function in a different way in the church. A much higher proportion of church work was being performed by the non-celibate–laymen and laywomen. Today, those men who enter the priesthood do so better screened and more mature in years–and, of course, in fewer numbers. Nuns are disappearing. And child sexual abuse has declined.

The point is: It’s much too simple to pretend that complex phenomena like marriage or faith-based celibacy are constants in the life of a society or an institution like the Catholic church. They are variables that interact with other variables. None of this is to exonerate abusers and their episcopal enablers. Nor is it to assert suggest that the all’s right with celibacy in today’s Catholicism. In the eleventh century, non-celibacy for secular clergy (including bishops) became problematic for a number of economic, social, and ideological reasons. And so, the church stamped it out. A well functioning religious institution knows how to change with the times.