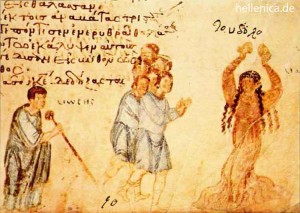 There’s been a certain amount of distress about the celebrating Americans did at news of the death of Osama Bin Laden, not least on the part of scrupulous Christians mindful of Jesus’ words in Matthew 5:

You have heard that it was said, “Love your neighbor and hate your enemy.” But I tell you, love your enemies and pray for those who persecute you, that you may be children of your Father in heaven…Be perfect, therefore, as your heavenly Father is perfect.

Of course, as Benedict Carey reports in today’s New York Times, “taking revenge and glorying in it” is natural and even socially beneficial. According to University of Miami psychologist Michael McCullough, “Revenge evolved as a deterrent, to impose a cost on people who threaten a community and to reach into the heads of others who may be contemplating similar behavior.”

That, however, is cold comfort to the likes of the Rev. J.C. Austin, who in an Abrahamic trialogue at Auburn Seminary earlier this week confessed, “Christians would agree it’s normal human behavior. But our doctrine of sin makes us very suspicious of ‘normal’ human behavior; Paul says that ‘in Christ we are a new creation; the old has passed away, the new has begun.’

Indeed, what Jesus had to say was clearly meant to stand in contrast to the Jewish status quo ante. After Pharaoh’s troops were drowned in the Red Sea, Moses and the Israelites sang a song of triumph, with sister Miriam leading the women with timbrels and dancing. At the end of the Book Esther, the Jews proclaim “a day of gladness and feasting” to commemorate the destruction of Haman and his sons. And then there’s the celebratory line in that most beloved of all psalms: “Thou preparest a table before me in the presence of mine enemies.” Eat your hearts out, enemies!

The flag-waving patriotism that greeted Osama’s end may have been unseemly. But according to my segment of the Judeo-Christian tradition, the Christian perfectionist critique is not merely unnatural; it’s, well, ungodly.