The Shame of Kiryas Joel 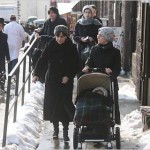 Should it be a shonda fur di goyim–something to be ashamed of before the gentiles–that according to the 2010 Census the poorest community in America (over 10,000 pop.) is a village in New York State composed almost entirely of Jews? Well, yes. But not because American Jews, the wealthiest religious body in the U.S., have failed to take care of their own.

Most of the residents of Kiryas Joel, in suburban Orange County, belong to the Satmar Hasidic sect–speaking Yiddish, eschewing Zionism, and living apart from the rest of American society. The women stay home and bear children. The men study Torah and Talmud and make a living not so much. And, as Sam Roberts detailed last week in the New York Times, they’re not actually poverty stricken. Thanks in part to gifts, no-interest loans, and other material aid from members of their community, they are quite well fed, clothed, and housed.

Because the other part is that they have no compunction about accessing whatever public support they can to support their religious lifestyle. Half of them get food stamps and one-third receive Medicaid and federal housing vouchers. And that’s not to mention the fancy pre-natal care facility built with $10 million in public funds. Or the “non-profit” commercial chicken-processing and matzoh-baking plants.

To be sure, the fact that most of the children in Kiryas Joel attend religious schools saves New York State a bunch of money in public education subsidies. And the village may achieve other savings for the government as well. In the story’s kicker, the village administrator contends that it doesn’t get more than its fair share.

“You also have no drug-treatment programs, no juvenile delinquency program, we’re not clogging the court system with criminal cases, you’re not running programs for AIDS or teen pregnancy,” he said. “I haven’t run the numbers, but I think it’s a wash.”

But this is not about an equitable distribution of public funds. Food stamps, Medicaid, and housing vouchers should by rights go to those who are truly in need, and involuntarily so.

The Amish reject government handouts. You don’t find the Benedictine nuns who run their own farm at the Abbey of Regina Laudis in Bethlehem, CT feeding at the public trough. As Passover draws to a close, I’d like to think that my people were not liberated from Egypt in order to milk the system for what it’s worth. Kiryas Joel is a shonda, and not just fur di goyim.