In my previous blog entry (Part One of this pair of posts), I described and illustrated how Christianity worldwide breaks down, in terms of its various branches, wings, and internal subdivisions: 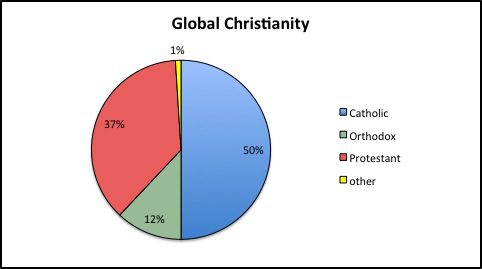 Now, moving from a broadly global perspective to a narrowly national one, we can see at once that a similar breakdown of American Christianity presents us with a very different picture: 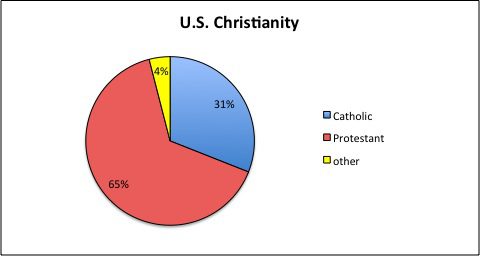 Clearly, the U.S. is not only an overwhelmingly Christian nation; it is also a very Protestant nation. Whereas Catholics outnumber Protestants on the world stage (50% vs. 37% of Christians globally), here at home it is the other way around: American Catholics are outnumbered by American Protestants by more than two to one (31% vs. 65% of U.S. Christians).

The remaining 4% of U.S. Christians is composed of various Orthodox Christians, Mormons, Jehovah’s Witnesses, and miscellaneous others.

As mentioned in my previous post, Protestantism is not one thing, but many; American Protestantism is accordingly highly fragmented and quite diverse. Thousands of individual Protestant denominations, sects, and independent churches exist within the U.S. However, we may at least group all of them into a very few major Protestant subcategories.

Doing so makes the world of American Christianity look like this: 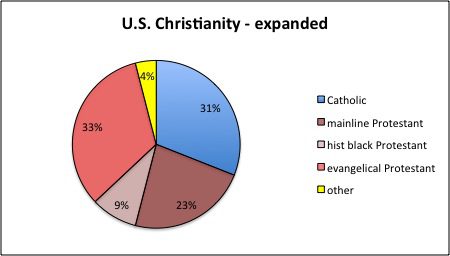 Most American Protestants can be placed into one of three broad categories: mainline (23%), evangelical (33%), and historically black (9%) churches and congregations.

The mainline or “mainstream” churches are the older, long-established, usually (but not always) theologically moderate to liberal Protestant denominations: Baptists, Methodists, Lutherans, Presbyterians, Episcopalians, and so forth. In recent decades they have not been growing; their populations are aging, and their numbers are somewhat in decline.

By contrast, in recent decades, evangelical Christianity seems to be increasing in popularity (and in numbers). Ranging from theologically moderate to conservative, evangelical Protestantism is associated with a number of conservative denominations — Southern Baptists, Church of Christ, Assemblies of God, Church of the Nazarene — as well as with a growing number of independent non-denominational churches, some of which are currently among the largest and fastest-growing in the U.S. There are now about as many American evangelicals as there are American Catholics, and about as many evangelicals as both mainline Protestants and historically black church members combined.

Historically black churches are just what the term implies: American Protestant church communities that have traditionally served primarily African-American congregations. Among the largest and best-known are the African Methodist Episcopal (AME) Church, and the Church of God in Christ (COGIC). Such historically black denominations account for about 9% of American Christians.

As all of this amply illustrates, Christianity today is far more diverse and fragmented than it might first appear to the casual onlooker. Diversity certainly seems to be its watchword.