Today (as I write, Wednesday, October 24), millions of Muslims from all over the world are arriving in the holy city of Mecca, in Saudi Arabia. They are converging upon this holiest of Islamic holy cities on the eve of the annual period set aside each year to accommodate the millions of Muslim pilgrims who converge here each year in order to fulfill one of the mandatory “Five Pillars” of Islam: the Hajj, or pilgrimage to Mecca.

This pilgrimage is a mandatory religious duty, which must be completed at least once in the lifetime of every Muslim who is both physically and financially able to make the journey. This year (2012), some 3.4 million pilgrims are expected to attend.

The Hajj (Arabic for “pilgrimage”) occurs each year during the twelfth and final month of the Islamic calendar, a month referred to by its Arabic name of Dhu al-Hijjah. More narrowly, the precise period of time which is specifically set aside during this month to accommodate the annual pilgrimage runs from the 8th to the 12th days of Dhu al-Hijjah.

On the Western (or Gregorian) calendar for 2012, tomorrow — Thursday, October 25 — corresponds to the Islamic calendar’s 8th day of Dhu al-Hijjah. So, it is tomorrow that the five-day Hajj itself will formally begin.

The Islamic calendar, unlike the Western Gregorian calendar, is a lunar calendar. Because of differences in the lengths of months, and in precisely when months begin and end, there is a certain amount of inbuilt “drift” between the two calendars; their respective months are not always in sync with each other.

During this brief time frame, over three million Muslim pilgrims from around the globe will participate in one of the world’s largest religious pilgrimages. Islam’s holy prophet Muhammad himself performed the Hajj, but the roots of this ritual pilgrimage at Mecca are also believed by Muslims to stretch all the way back to the time of the ancient patriarch Abraham.

For Muslims, this once-in-a-lifetime pilgrimage experience is a profound, deeply moving, even life-changing event. For additional specific details on the nature of the Hajj itself and what it consists of, please refer to my special article entitled “The Hajj: Pilgrimage to Mecca,” currently featured on the Beliefnet.com home page. 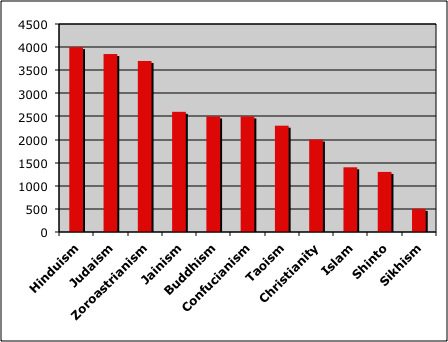 How OLD Are the Religions?
archives most recent
More from Beliefnet and our partners
previous posts