In several of my most recent blog posts, I’ve been talking about Judaism — the High Holy Days in general, and Rosh Hashanah and Yom Kippur in particular. But many people who are new (or relatively new) to the study of religions do not necessarily have a very clear sense at all of just how many Jews there actually are in the world, or how many Jews might live in the U.S., or where the largest population centers of Jews might be found across the globe.

When I was new myself to religious studies (or “comparative religion”), whenever I initially began the study of any particular religion, I always wondered, “How many of these guys are there, in the world? Is this a really big religion? A really small religion? A medium-sized religion? If it’s big, how big? If it’s small, how small?”

Sometimes the answers to those sorts of questions can prove quite surprising.

Whenever people think of the major religions of the world (“major” not necessarily in terms of sheer size alone, but also in terms of global reach, historical significance, cultural impact, etc.), most probably think first and foremost of “the big five”: Hinduism, Buddhism, Judaism, Christianity, and Islam.

One might naturally also tend to assume that the populations of each of these “big five” would probably be at least very roughly equivalent to the others, or at least not wildly different from each other by several orders of magnitude.

However, in the case of Judaism, one would be wrong.

In a previous blog entry, I posted a global religious pie chart which graphically displayed the various sizes of the world’s religions, relative to each other (and in another entry I also presented a similarly designed U.S. religious pie chart, showing the relative sizes of the majority faiths within the United States). The global “pie slices” of Hinduism, Buddhism, Christianity and Islam were each religious behemoths in size, compared with Judaism’s thin sliver of a slice.

I have found that this often comes as rather a shock to a number of the students in my community college world religions courses, each semester. Many of them simply had no idea that Judaism’s numbers were so small, compared with the population sizes of the other major religions (or compared with the total world population as a whole).

Since colorful graphics can often express statistical and demographic points far more eloquently, and with much greater immediate impact, than can mere walls of text or columns of figures (or since, as the old aphorism has it, “a picture is worth a thousand words”), I’d now like to present a few more such “religious population pie charts,” these all having to do with the Jewish population.

First of all, how many Jews are there, in the entire world?

Or, expressed in colorful graphic imagery (and bearing in mind that in this graphic, “0%” actually just means “less than 1%”): 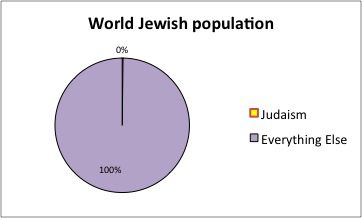 Okay. Well, so how many Jews are there, not in the entire world as a whole, but just in the United States alone?

Surely that percentage must be a considerably larger one, some might think. Well, it is larger — but not by very much (and perhaps not by as much as many might have expected, or assumed).

The total population of the U.S. is currently at just over 300 million people. Jews account for only about 1.7% of that total. Or, as the following pie chart indicates (bearing in mind that it has rounded this figure up slightly, when in reality the Jewish slice is less than 2%): 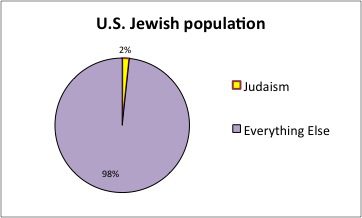 Finally, where do Jews mostly live, around the world? Are they fairly evenly spread out, around the globe, or are there certain significant local concentrations of Jewish populations, scattered here and there? If so, how many such concentrations are there, where are they located, and how big are they?

As it happens, there are two major — and I do mean major — Jewish population centers in the world. One of them is, of course, Israel. The other is the United States. Each of these two national centers is big, really big, in terms of how much of the total Jewish world population is to be found within it: 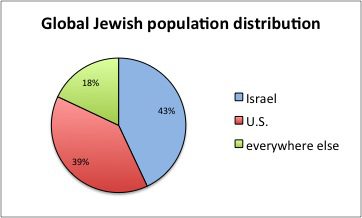 Israel alone is home to some 43% of the total world Jewish population (that’s nearly half). The United States isn’t far behind; some 39% of the world’s Jews call America home. The remaining 18% of the Jewish populace is spread, far more thinly, throughout the rest of the globe.

So, that’s Jewish demographics in a nutshell. Now, what about Jewish “denominations” (or sects, or movements)?