It’s not very helpful of Dreher to label the DC Tea Party protesters as “kooks” based on one picture. I know that a picture is worth a thousand words, but come on, you base your opinion of a movement on this one picture? Most of the protesters were average Americans who wanted to make their voices heard. Politicians don’t get why we’re upset that the government is trying to take over our health care and spending trillions of our dollars (and yeah, we were mad at the Republicans when they spent billions but as I say, we rarely protest — I changed that to rarely because a commenter mentioned that we did in 2000, my bad) and they wanted to express their outrage in their signs. That’s why there were so many home made signs. People wanted to remind the president and the Democrat-controlled Congress that they were the governed as well (the left are not their only constituents). Just because Obama won 52% of the vote doesn’t give him the right to take over our health care and bankrupt this nation.

And yeah, there were signs that were over the top but the majority were not. And yeah, you don’t want to be associated with nutters but from the pictures I’ve seen, most of the signs were relatively benign. Do you let the over the top people take over the protests? Are they the only ones who can voice their opinion? I’m sure that during the Iraq war protests, the sane leftes didn’t agree with these types of sign or that those who protested for health care reform wouldn’t agree with the kill Bush sign this guy carried to a town hall meeting.
I think this sign (that I missed among my daughter’s pictures — she did take over 100 pictures) sums up what the protest was about: 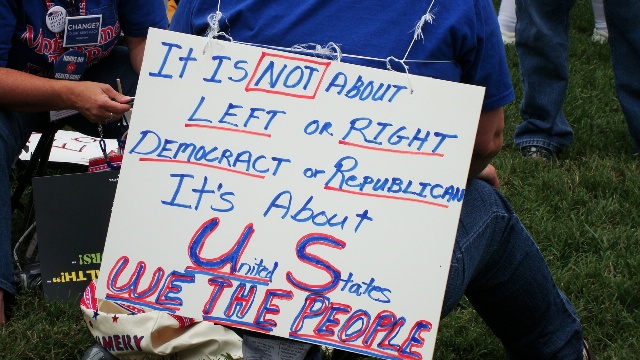 Can you see anything different from what Dreher is saying in print:

Aside from his personal decency, it’s hard to find anything to say for Obama. He is a statist liberal who is continuing and expanding the centralizing policies of his predecessor, whose expansion of the national security state and uncritical embrace of Wall Street finds no real enemy in Obama (much to the surprise of some on the left). Unlike the president, I’m a social and religious conservative. Unlike this or the last president, I believe in fiscal responsibility, limits, localism and foreign-policy realism.

And what others are saying in signs? They don’t have his voice: his blog and newspaper. This was their chance to let the politicians know what they think of Obama’s power grab.
You know what’s funny about all this, that the network evening news shows (CBS, NBC) gave a far more accurate report of the protests than our conservative pundits. I guess it’s because they were actually there talking to the people and not sitting in Texas pontificating about them.

Thank you for visiting Reformed Chicks Babbling. This blog is no longer being updated. Please enjoy the archives. Here is another blog you may also enjoy: Inspiration Report Happy Reading!!!

My dear friend Michele slipped into eternity on Wednesday, February 1.   She was a remarkable woman who left a legacy of faith, determination, and love. For three years she courageously battled the ovarian cancer that eventually robbed her of her life.  A few days before she died, one of her doctors told Michele that […]

The rumors of my demise have been greatly exaggerated

My husband told me that there are rumors that I’ve died. I’m happy to report that I’m still very much alive. My cancer has gone to stage four but we are controlling it with chemo, the cancer numbers are currently in the normal range. I’ve stopped blogging to concentrate on my daughters and writing a […]

An update and a prayer request

Several people have asked about Michele’s condition, and have promised to pray for her. On her behalf, I thank you for that. I spoke with her a little while ago, and she asked that I come here and tell you what’s going on, and to ask you to pray for her. She isn’t able to […]