Hosanna: Blessed is the King of Israel 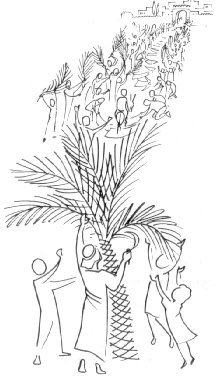 Well, I forgot today was Palm Sunday. I’m forgetting a lot of things lately. I think it’s the lack of sleep. Our Thanksgiving prayer today in church was: “Thank you for reminding us of your love and the sacrifice of the death of your son, Jesus Christ. In this coming week remind us of your presence, encourage us with your providence and challenge us in our devotion. May we rejoice and be filled with wonder as you move in our lives, our service to others, and our community. May we serve you and others with joy. We ask this for the sake of him through whom all things were made, your Son Jesus Christ our Lord, Amen.”
Jesus came as the King of Israel bringing salvation to His people, but Israel did not realize it. Some did, like Zechariah:

Luke 1:67 -79 “And his father Zechariah was filled with the Holy Spirit and prophesied, saying, 68 “Blessed be the Lord God of Israel, for he has visited and redeemed his people 69 and has raised up a horn of salvation for us in the house of his servant David, 70 as he spoke by the mouth of his holy prophets from of old, 71 that we should be saved from our enemies and from the hand of all who hate us; 72 to show the mercy promised to our fathers and to remember his holy covenant, 73 the oath that he swore to our father Abraham, to grant us 74 that we, being delivered from the hand of our enemies, might serve him without fear, 75 in holiness and righteousness before him all our days. 76 And you, child, will be called the prophet of the Most High; for you will go before the Lord to prepare his ways, 77 to give knowledge of salvation to his people in the forgiveness of their sins, 78 because of the tender mercy of our God, whereby the sunrise shall visit us from on high 79 to give light to those who sit in darkness and in the shadow of death, to guide our feet into the way of peace.”

Luke 2:29 “Lord, now you are letting your servant depart in peace, according to your word; 30 for my eyes have seen your salvation 31 that you have prepared in the presence of all peoples, 32 a light for revelation to the Gentiles, and for glory to your people Israel.”

Did the crowds realize it when Jesus entered Jerusalem on the back of a colt?

John 12:12 The next day the large crowd that had come to the feast heard that Jesus was coming to Jerusalem. 13 So they took branches of palm trees and went out to meet him, crying out, “Hosanna! Blessed is he who comes in the name of the Lord, even the King of Israel!” 14 And Jesus found a young donkey and sat on it, just as it is written, 15 “Fear not, daughter of Zion; behold, your king is coming, sitting on a donkey’s colt!” 16 His disciples did not understand these things at first, but when Jesus was glorified, then they remembered that these things had been written about him and had been done to him. 17 The crowd that had been with him when he called Lazarus out of the tomb and raised him from the dead continued to bear witness. 18 The reason why the crowd went to meet him was that they heard he had done this sign. 19 So the Pharisees said to one another, “You see that you are gaining nothing. Look, the world has gone after him.”

I pray that you will focus your attention this week on the sacrifice Christ made for His people.
(Graphic via Crossmap Clipart)

read next post
Good Morning! (well, it was when I wrote this)
archives most recent
More from Beliefnet and our partners
previous posts

Thank you for visiting Reformed Chicks Babbling. This blog is no longer being updated. Please enjoy the archives. Here is another blog you may also enjoy: Inspiration Report Happy Reading!!!

My dear friend Michele slipped into eternity on Wednesday, February 1.   She was a remarkable woman who left a legacy of faith, determination, and love. For three years she courageously battled the ovarian cancer that eventually robbed her of her life.  A few days before she died, one of her doctors told Michele that […]

The rumors of my demise have been greatly exaggerated

My husband told me that there are rumors that I’ve died. I’m happy to report that I’m still very much alive. My cancer has gone to stage four but we are controlling it with chemo, the cancer numbers are currently in the normal range. I’ve stopped blogging to concentrate on my daughters and writing a […]

An update and a prayer request

Several people have asked about Michele’s condition, and have promised to pray for her. On her behalf, I thank you for that. I spoke with her a little while ago, and she asked that I come here and tell you what’s going on, and to ask you to pray for her. She isn’t able to […]