A war on international adoption

Over the weekend, two different adoptive families posted on the HopeChest Facebook wall about adopting children they met on HopeChest vision trips. While HopeChest is not an adoption agency, we have seen this happen time and time again. Just because we’re not an agency doesn’t mean he doesn’t use us to create forever families through adoption. And over the past 16 years, it’s happened quite a bit.

Sometimes it happens specifically–a family meets a child that they are called by God to adopt. And other times it happens generally–after being exposed to the needs, a family begins the process of adopting a child they have never met before.

Anyone who has been through or around international adoption knows that it is a “stomach-lurching-into-your-throat” ride. And it comes with equal parts joy and heartache. It is the promise of new beginnings mixed with the sorrow of difficult goodbyes. Bringing a child out of their culture and into ours couldn’t be any other way.

Yet, international adoption is a must. Given the global spike in the number of orphans worldwide, it is clear that millions of children are being deprived of a key human right: a family. And with families around the globe willing to restore that right to children, our governments should be doing everything possible to place eligible children with eligible families as quickly as possible.

Yet, instead of opening up the pipeline for kids we know are adoptable, it is getting narrower and narrower. Countries are being pressured to restrict and close off their programs…even as orphan populations grow.

Organizations like UNICEF maintain practically anti-adoption policies, and seek to keep children in their home country no matter what the cost. Is this a responsible position? Or some enlightened theory with no practical application?

International adoption elicits strong opinions, like the one in the article I posted below. Leave your comments on these questions:

Is having a family a human right that every child is entitled to?

What role does international adoption play in protecting and promoting that right?

The United States and UNICEF wage war against international adoptions

EASTON, Md, August 2, 2011—When I speak to people outside the adoption community, many are incredulous that UNICEF, the very organization that provides so much aid to children worldwide,is behind restricting inter-country adoption.  On the surface it just doesn’t make sense.

To fully understand what is happening, why countries around the world – from Guatemala to Vietnam to Kyrgyzstan  — are under enormous pressure to reinvent, reduce and, in some cases, end their inter-country adoption programs, you must understand the “why” behind the “what.”

When pressed for reasons why the U.S. Department of State (DoS) and UNICEF they actively engage in closing inter-country adoption programs, the very first response from both entities is that they are protecting children.  They say they are working towards an adoption system that works against child trafficking.  That goal is laudable.

The safety of children, of course, is paramount and must be the cornerstone of any adoption program.  I have yet to meet an adoptive family that believes otherwise.  The good news is we all agree.  So where’s the problem?

Ultimately UNICEF, and to a lesser extent the Department of State, are opposed to inter-country adoption, calling it a “last resort” for children.  Just what is the first resort?  UNICEF offers what appears to be a vague notion of social and economic justice in the world.  I share their enthusiasm for creating a more just world, and, in my experience, American families who adopt from overseas tend to be more engaged in the issues of economic justice in their children’s birth countries than others.  We are natural allies of UNICEF, so what’s going so wrong in relations between many adoptive parents and the organization?

The stumbling block is that unlike UNICEF adoptive parents do not believe that even a single child should be subjected to life as an orphan, serving in effect as collateral damage, as geopolitical solutions to world poverty are played out.  To us, it is patently unfair for children to be held hostage, condemned to life without a family, as the world works towards peace and justice.

One would think that the primary goal of UNICEF and the U.S. would be to ensure that orphans who can be adopted are immediately adopted.  The longer children stay in orphanages, the greater the damage.  Tthe effects of long-term institutionalization are dire both physically and psychologically.

“Largely deprived of the human touch as they grow up, those who survive physically are unlikely to develop emotionally and mentally in ways that will make it possible for them to relate meaningfully and happily to either human beings, or to learn or work in meaningful ways.  The longer they spent in such orphanages, the less chance they will have are anything resembling normal development.”

Most of these orphans are institutionalized, homeless, malnourished and uneducated.  They are seeking permanent, loving families –- adoptive families– what Dr. Jane Aronson, a leader in the field of adoption medicine, calls the “gold standard” for care.  Yet, UNICEF continues to assert that inter-country adoption should be a last resort, an option only when no alternative care can be found for orphans, a position that flies in the face of all we know about child welfare.

As Bartholet writes: “[T]hose placed in international adoption flourish.  Those placed in infancy will do essentially as well as other children in their new country.  Those placed later will do far better than they would in the absence of placement —international adoption has been shown to overcome even very significant deficits caused by early deprivation, with the age of placement overwhelmingly predictive of the chance for a normal life.”

This isn’t just what a Harvard professor says.  This position also has the advantage of being common sense. But not to UNICEF, which continues to argue that children should remain in their country of origin, at almost all costs, regardless of the type of care or the quality of that care.

The U.S. has not publicly taken as direct and hard of a line as UNICEF on this particular point.  However, the actions of the DoS, with its years of inter-country discussions, calls for additional moratoriums, insistence on the blanket passage of the Hague requirements even in countries where Hague requirements would all but nullify the eligibility of most orphans (such as the case in Haiti where most birth records were destroyed in the earthquake), and its refusal to assist pipeline orphans (children already matched with American families and living now for years in orphanages) has resulted in the near paralysis of international adoption.

Every child has a right to a family.  That powerful statement is made by Paulo Barrozo, a professor of international law at Boston College Law School, who authored an important paper on international adoption called “The Child as a Person: A Response to ‘International Adoption, a Human Rights Approach.  He argues that children have individual rights as sovereign beings entitled to become fully human within a family structure.  No government or institution should, therefore, be permitted to take away this fundamental right.

But that is precisely the effect of the current stance taken by UNICEF in deciding that unparented children should not be paired with prospective parents from different backgrounds, be that country, race or culture.

Ultimately, we all agree the world should work on the very real issues of global poverty, social injustice, and infectious diseases, which are largely contributing to the number of orphans worldwide.  If we don’t address these macro issues we will never reduce the numbers of orphans or their suffering.  But while we are doing that, we should also be promoting micro solutions.  And, yes, I know, the simple act of bringing one child into one family is far less sexy to discuss at international conferences and in geopolitical policy journals, but its every bit as important.

Somehow in the process of developing a system to eradicate child suffering the very people that system is designed to help—orphaned children—have been forgotten.  It’s time for UNICEF and the U.S. Department of State to bring back a sense of moral urgency and put children ahead of politics.

Andrea is an adoptive mother and a journalist. She is at work on a book, “The Red Thread,” a collection of stories told by families united through adoption.  She is also the travel and food editor for the Communities at The Washington Times.  She is also owner of Media Branding International, a public relations/media consulting firm.

Read more The Red Thread: An Adoptive Family Forum in The Communities at The Washington Times.    Follow Andrea at Twitter @ANDPOE and @WTCLifesOnline. She can also be found on LinkedIn. 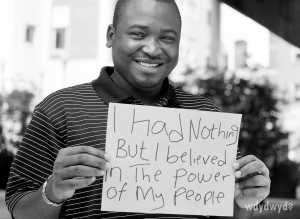 Are We Guilty of Slumdog Tourism?
archives most recent
More from Beliefnet and our partners
previous posts