Swaziland Protests Are Met with Crackdowns By Government

It’s difficult to get clear information on exactly what’s happening in Swaziland regarding the protests. One thing is certain, the government is dealing with these protests harshly. A state of emergency has been declared and we know from our people on the ground that bus routes, schools, and many businesses are closed.

AllAfrica.com is reporting that, “In a dramatic turn of events, more than 200 people, including journalists, union members and members of political parties, are reported to have been detained in various police stations across the country. There have also been reports of police brutality and ‘abductions’ of protesters. “These events reportedly unfolded in Mbabane and Manzini – where at least half of the total urban population reside.”

This is an unusual move for the government of Swaziland and is sure to insight further protests and inflame the situation.Things are very tense and it’s difficult to determine which direction this will take.

Swazi’s are committed to reform the reports says that, “What is clear is that Swazi society is changing very rapidly and the potential triggers of conflict are now manifest. The tension between adherence to traditional ethos and norms and the increasing yearning for a democratic breakthrough looms large and will need to be resolved in a timeous fashion. The imperative for reforms that allow Swazi citizens to govern themselves and exercise their economic, political and social rights undoubtedly serves as the future model of political governance – and can no longer be postponed.”

The financial issues are deep and as long as the economy continues to move in the negative direction, there will continue to be opposition against the current leadership. 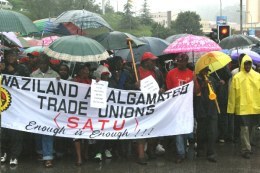