Christianity. It is what it is today because of the sacrifice many great Christian saints have made – many with their lives. On All Saints Day, it is good for us to remember that sacrifice and thank God for those who have gone before us. 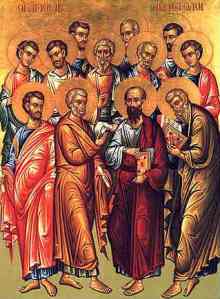 Foxe’s Book of Martyrs – tells the history of many, including the twelve disciples:

St. Stephen was stoned to death.

James the Great was beheaded and his accuser repented, professed Christ and also was beheaded.

Philip was scourged, thrown in prison and then crucified.

Matthew was slain with a halberd (a pike fitted with an ax).

James the Less was beat and stoned by the Jews and had his brains dashed out with a fuller’s club.

Matthias was stoned at Jerusalem and then beheaded.

Andrew was crucified on the cross.

Mark was dragged to pieces by the people of Alexandria.

Peter was crucified upside down.

Paul gave his neck to the sword.

Bartholomew was cruelly beaten and then crucified.

Thomas was thrust through with a spear.

Luke was supposed to have been hung on an olive tree.

John, the beloved disciple, was the only disciple to escape a violent death.